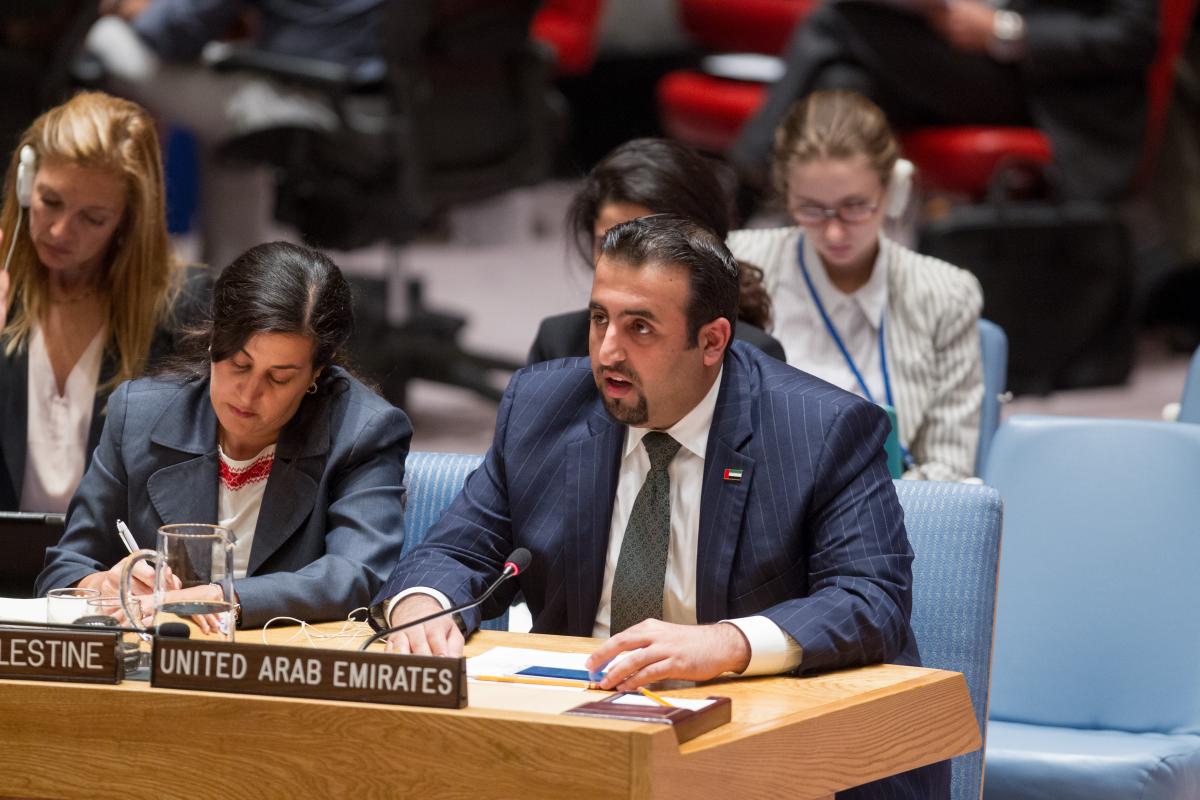 It is my pleasure to congratulate New Zealand on behalf of the Arab Group at the United Nations for the assumption of the presidency of the Security Council this month and I thank his Excellency Murray McCully for chairing this open debate.

I wish also to seize this opportunity to express our thanks and appreciation to your predecessor, the Permanent Representative of Malaysia, for his successful management of the Council’s work last month.

We also thank the UN Special Coordinator for the Middle East Peace Process and Personal Representative of the Secretary-General to the PLO and the Palestinian Authority, Nickolay E Mladenov, for his briefing and for his tireless efforts for achieving peace.

We would also like take this opportunity to express our full support to the statement of the State of Kuwait, which was delivered on behalf of the Organization of the Islamic Cooperation.

The briefing this morning has reflected, like all previous monthly briefings given by  the Secretariat on this item, the worsening humanitarian situation of the Palestinian people resulting from the illegal practices and actions of Israel, which violate international laws and norms and constitute the direct cause for the continued stalemate in the long hoped peace talks.

Despite all international and regional efforts and initiatives made during the past two decades, including the efforts made by the Quartet and the United States, the main sponsor of peace process, we continue to witness many lost opportunities for achieving peace. This failure has not only contributed to prolonging the suffering of the Palestinian people and increasing their humanitarian and economic losses, but also deepened the status of frustration, despair and instability and has led to the emergence of dangerous extremism which is now threatening our region and the entire world.

These Israeli measures, which violate the international law and ignore the vast majority of the international community, have gone so far to include suppression of the Palestinian people and violation of their most basic human rights through indiscriminate restriction and harassment of Palestinian people, including children and women, and subjecting hundreds of innocent people to illegal arrest and detention. The continued siege and the repeated targeting of Gaza Strip, including Israel’s war against Gaza last year, have resulted in killing hundreds and disabling thousands of civilians in addition to the deliberate destruction of the Palestinian infrastructure facilities such as the United Nations services, which constitute the essence of life for the population of Gaza.

In this regard, we welcome the recent report of the International Commission of Inquiry on violations and war crimes in Gaza, which reflected the unprecedented levels of suffering and hardship experienced by the unarmed Palestinian people, and in this context we call for implementing an accountability system in order to bring those responsible for war crimes to justice.

We also urge the donor countries to fulfill their commitments announced in Cairo conference last year in order to ensure the necessary financing required for the reconstruction projects in Gaza. And we stress in this regard the shared responsibility of the international community towards lifting the Israeli siege imposed on Gaza strip and providing the necessary support for the UN programs, especially UNRWA, in securing the basic needs of Gaza population and addressing their fragile situation.

We also take this opportunity to reaffirm before this Council our full and continuing support to the Palestinian Unity Government and urge the international community to do the same and to increase its support for this government in order to enable it fulfill its responsibilities and take a leading role in restoring its control over Gaza strip, including its border crossings, and also to support its efforts towards achieving national reconciliation.

The Arab Group believes that the continuation of this historical injustice done to the Palestinian people by Israel is one of the main causes for the current deterioration in peace and stability situation in the region, and it inflames tensions, hatred, exclusion and extremism in some of our countries which can seriously impact the future of the region and the entire world. Therefore, we should not let the failed negotiation process enter a vicious circle and reach a dead end without making effective international efforts to eliminate the causes of this failure, for which Israel is fully responsible. Therefore, we demand the Security Council now more than ever not to limit its efforts to holding routine periodic briefings, despite their importance, but also to play a leading role and take the necessary steps towards immediate cessation of all violations committed by Israel to the principles and terms of peace process, which is based on ending the Israeli occupation and accomplishing the two-state solution, in order to create an appropriate environment for resuming peace negotiations.

We further call upon the international powers to support the efforts made by the Arab Ministerial Committee towards launching serious negotiations, and urge the Security Council to respond to the repeated calls and initiatives launched by the Arab Group since last year for adopting an effective resolution that rescue the peace process. A resolution that determines the basic terms of reference of these negotiations based on the two-state solution, the Madrid principles and the Arab peace initiative, and ensures a comprehensive, just and lasting settlement within a specified timeframe to end all aspects of Israel’s occupation, including total military withdrawal from all territories occupied by Israel since 1967 including East Jerusalem. This will help in establishing an independent, sovereign, viable and internationally recognized Palestinian State with Jerusalem as its capital, living side by side with Israel in permanent peace and security. In this context, we would like to express our support for the efforts made by some of the members of the Security Council, particularly France.

We regret that the Syrian crisis continues for the fifth year and for the ongoing siege and targeting civilians by the Syrian regime forces, which are supposed to be responsible for their protection, and by the extremist, terrorist and outlaw groups, in particular Daash, which disregard all religious and humanitarian international principles.

The Arab Group renews its support for all efforts aimed at reaching a political solution for the Syrian crisis, particularly the efforts made by the Special Envoy of the Secretary-General for Syria, Mr. Staffan de Mistura based on the outputs of Geneva Conference. We also hope that these efforts will contribute to achieving a quick and positive outcome and realize the Syrian people’s aspirations towards a democratic political transition that includes all national Syrian parties without exception, and ensures transitional justice and restores stability and security to the country.

Until achieving this goal, we urge the international community to increase its assistance to the affected and displaced Syrians who fled the conflict, and to share the burden of Syrian refugees with the neighboring countries, especially, Jordan, Lebanon and Iraq.

In conclusion, we hope our debate today will contribute to advancing international efforts aiming at resolving the Palestinian issue and ending the Syrian crisis in order to bring peace and stability to our region.