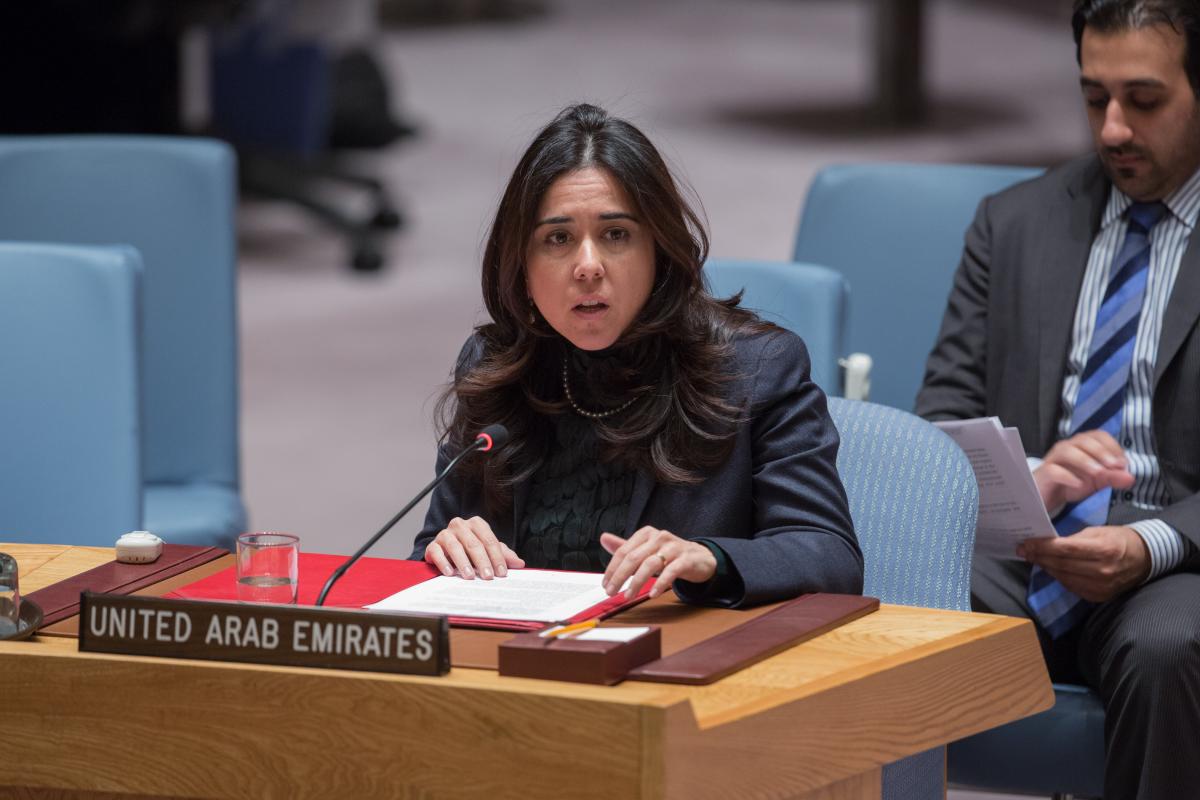 Thank you, Madame President for holding this timely debate, and we thank the Secretary-General for his briefing. In order to provide more focused remarks, I will confine the UAE’s comments to the Middle East region, where there is a profound perception that the United Nations is failing to implement its primary purposes as defined in Article 1 of the Charter.

As we already know, ISIS and other violent extremist groups are responsible for despicable crimes throughout our region. There is no question that the primary responsibility for these crimes lies with the extremists.

Yet this is also a consequence of the failure of national governments and the international community – through the United Nations – to deal promptly and effectively, within the international legal framework, with these non-state actors and their backers. In large part this is because the instruments available to the Security Council have not been able to adapt rapidly enough to correspond to the specific nature of the threat. What good are travel bans or asset freezes when the culprits evade official documentation such as passports and bank accounts?

This inability to check the rise of non-state extremist actors means they now constitute an existential threat to the entire Middle East as we know it, and specifically to the UAE model of moderation, tolerance and respect for religious freedom. Increasingly, they also pose a global threat in the form of the tragic and violent attacks they have perpetrated worldwide. These threats will continue to grow and evolve, and the international community’s response must keep pace or risk becoming ever more outdated and ineffective.

A further equally central cause of instability in our region is the rise in the rampant use of force against the territorial integrity, sovereignty and political independence of states.

To be clear, these detrimental acts are taken by state actors, and we note a growing cynicism at play – a divergence between what states claim to be in the international arena, and what they actually do. We therefore need a more robust response to state drivers of instability.

Iranian forces continue to occupy three islands in the Arabian Gulf that are part of the United Arab Emirates, in contravention of Article 2 of the Charter. In accordance with its obligation to the peaceful settlement of disputes, the UAE has been calling on Iran to resume bilateral negotiations, refer the matter to the ICJ, or submit to international arbitration.  These calls have gone unheeded so far.

States throughout the region continue to be alarmed by the Iranian constitution, which calls for the export of its revolution to other countries. The principles of the sovereign equality of Member States and of non-intervention as outlined in Article 2 of the Charter are continually violated by Iran’s successive attempts at destabilization across the region.

Their proxy militias are provocative, destabilizing and dangerous – yet they go unchallenged. We believe that Iran must make a serious commitment to join the community of nations as an accountable member, and to stop arming, funding and enabling radical, violent and extremist entities.

We see no censure of such actors at the United Nations.

Madame President, in the view of the UAE, the legitimacy and effectiveness of the United Nations can be restored. Some recommendations for doing so include the following:

First, we call for better implementation of, and greater efforts to hold states accountable for, their obligations under existing Security Council resolutions. In our region examples include the failure to enforce resolution 2216 on Yemen, or to implement numerous resolutions on humanitarian access in Syria, as well as the large number of resolutions calling for the withdrawal of Israel from the occupied Palestinian territories. If states fail to uphold these existing responsibilities, we must question what value further resolutions might have. The very credibility of the Security Council is at stake.

Second, we welcome the Secretary-General’s focus on prevention. The United Nations must expend more and better quality resources on prevention as a key instrument of peacekeeping, and on mediation, negotiation, arbitration and judicial settlement – as well as in support of Chapter VI interventions. Additionally, greater use by the Secretary-General of the prerogative under Article 99 of the Charter would be welcomed – not instead of Council engagement, but alongside it.

Finally, the Security Council must apply a single standard to all actors, all states and all perpetrators of occupation, state terrorism and foreign interference. Efforts must be redoubled to strengthen accountability by sovereign states, protect those living in conflict and end injustice.

This is a watershed year for the United Nations. Nothing will reflect the intention of the Security Council to re-engage with the Middle East more than its choice of candidate for the next Secretary-General. The UAE, with many other states, hopes that the Council will take in the views of the full membership as it approaches this decision.

Let me conclude by wishing Venezuela continued success in its presidency of the Security Council this month.