In the presence of H.H. Sheikh Abdullah bin Zayed Al Nahyan, Minister of Foreign Affairs and International Cooperation, the UAE Ministry of Defence and the General Women’s Union – under the patronage of H.H. Sheikha Fatima bint Mubarak, Chairwoman of the General Women's Union, President of the Supreme Council for Motherhood and Childhood, and Supreme Chairwoman of the Family Development Foundation – signed a new Memorandum of Understanding with UN Women that will build the capacity of women in the military and peacekeeping in the Arab region.

Among the signatories at the ceremony, which was held at the UAE Mission to the United Nations in New York, were 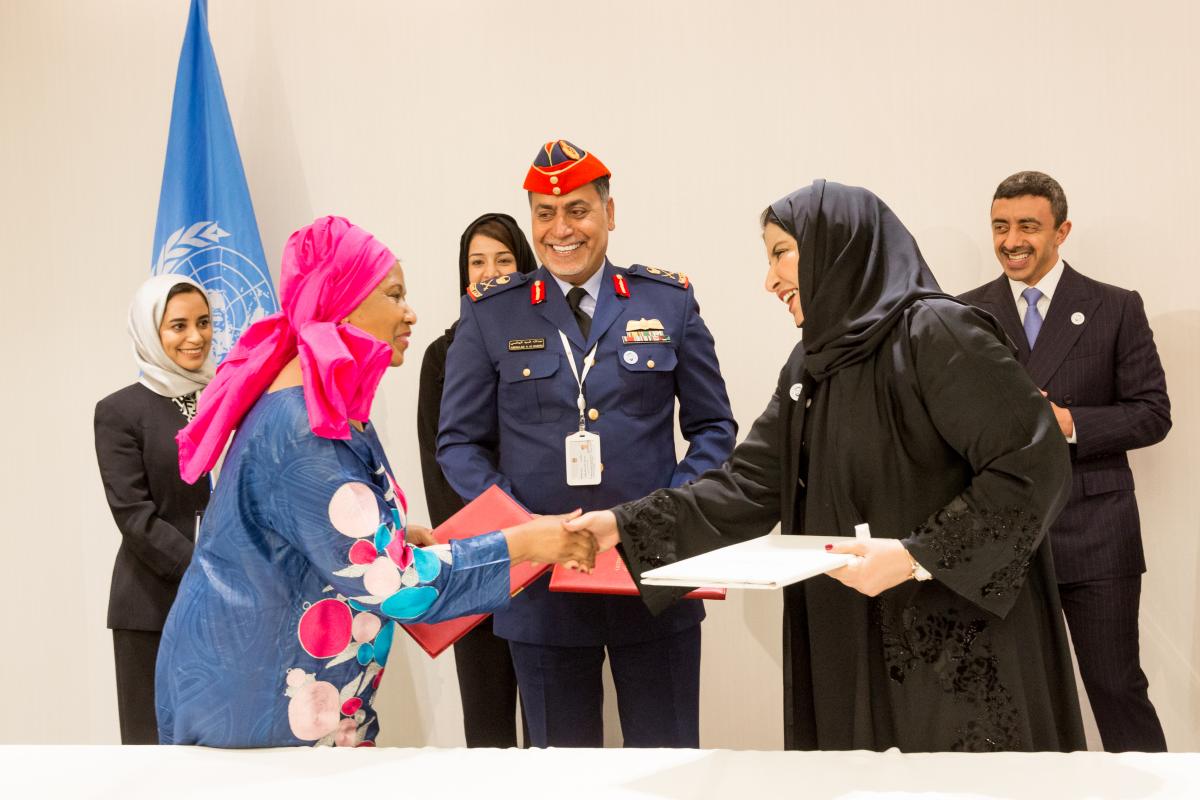 Commenting on the signing, Sheikh Abdullah bin Zayed said, "Today represents a historic moment in the United Arab Emirates’ steadfast partnership with UN Women. The UAE will continue to advocate for the full empowerment of women, particularly under the leadership of H.H. Sheikha Fatima bint Mubarak. We will do this hand-in-hand with our Ministry of Defence, the General Women’s Union, and our partners at UN Women to ensure that women in our region and around the world are given the training they need to serve in the security sector, where their presence and leadership adds to the operational effectiveness of missions and increases peace and stability globally. Further, the UAE is committed to advancing the Women, Peace and Security agenda and promoting the tenets of UN Security Council Resolution 1325 both at home and abroad, and we hope that this training programme is just one of many initiatives to come in support of this agenda."

Maj. Gen. Al Hashmi added, "The UAE is committed to ensuring that women are equipped with the skills necessary to contribute to peace and security globally, from defending national interests to providing humanitarian assistance in times of crisis. This is why the UAE’s Ministry of Defence will be leading this military and peacekeeping training at the UAE’s Khawla bint Al Azwar Military Academy for Women, where women have undergone military training for the past twenty-seven years." The Khawla bint Al Azwar Military Academy is the first in the region dedicated exclusively to training women in the military, founded in 1991 at the directive of the late Sheikh Zayed bin Sultan Al Nahyan, Founder of the UAE.

Noura Al Suwaidi remarked, "Since 1975, under the patronage of Sheikha Fatima bint Mubarak, the General Women’s Union has led national efforts in empowering women. We believe that these efforts extend to empowering women in all sectors, including the security sector, where women make real, tangible contributions everyday to keeping families and communities safe."

Ambassador Nusseibeh reinforced this point by underlining the UAE’s commitment to advancing the Women, Peace and Security agenda. "The UAE will continue to advance the role of women in all aspects of peace and security because we believe that when women are represented throughout our society – especially as leaders and decision-makers – that our societies become more tolerant, more prosperous, and more stable. Building the capacity of women to join the security sector in their national capacities, and providing them with the training to participate in peacekeeping missions around the world isn’t just the right thing to do, it’s the smart thing to do."

UN Women Executive Director Phumzile Mlambo-Ngcuka remarked, "We have long known that women peacekeepers add tremendous value to operational effectiveness. Security Council Resolution 2242 calls on Member States to double the participation of women as uniformed personnel in UN Peacekeeping Operations by 2020. Innovative partnerships and initiatives like this one are key to meeting this target."

Director of the UN Women-UAE Liaison office for the GCC, Dr. Mouza Al Shehhi, added "We are pleased that this collaboration between the UAE and UN Women is the first project of such a global and strategic scale to be spearheaded by the UAE’s Liaison Office. We are looking forward to working closely with the Ministry of Defense, the General Women’s Union, and our UAE government partners to see this program evolve into a long-term strategic partnership to increase the number of women represented in military and peacekeeping fields. Together, we can address this important global issue."

The UAE and UN Women have a long history of partnership. The UAE has been a supporter and contributor to UN Women since its founding in 2010. The UAE has served on UN-Women’s Executive Board from 2013 to 2018, serving as Vice-President of the Asia-Pacific Group and President of the Bureau during that time. In 2016, a UN Women Liaison Office in Abu Dhabi was inaugurated to assist UN Women’s advocacy and partnership efforts in the region.