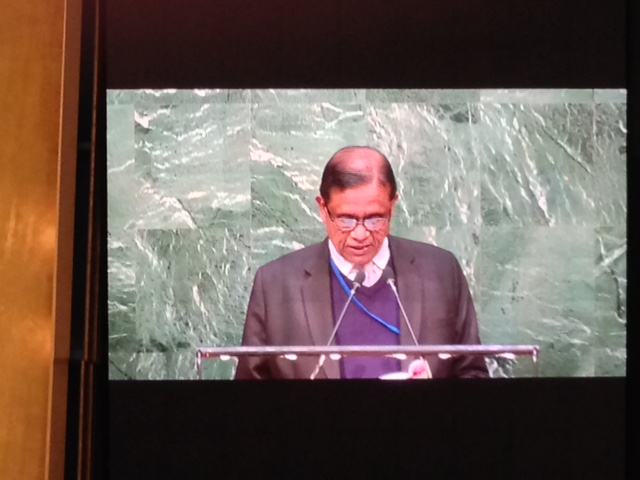 Plenary Debate of the General Assembly

My delegation welcomes the efforts of the Secretary General and his proposed plan of action to Prevent Violent Extremism, with a focus on seven priority areas.

As a country that had until 2009, suffered under the oppressive yoke of violent extremism and terrorism for nearly three decades, Sri Lanka understands the challenges, and encourages genuine efforts to strengthen the United Nations system, and its role and effectiveness in addressing this issue.

Sri Lanka wholeheartedly condemns violent extremism and terrorism in all its forms and manifestations, and recognizes the need to acknowledge the link between violent extremism and terrorism, which is a scourge not exclusive to any one country or region, and which is spreading across national borders. This rising transnational phenomenon challenges existing borders, and threatens the very fabric of the principle of sovereign states upon which the international legal order is based.

We continue to be deeply concerned over the acute and growing threat of foreign terrorist fighters (FTFs). With tens of thousands of such fighters hailing from over 100 States, it is imperative to harness global support and respond more aggressively to these threats. This phenomenon assumes serious proportions given the widespread death and destruction caused by organizations such as ISIL/Da’esh and other groups. We have also to look at new and innovative ways to counter this growing threat. For instance today it is well known that there are more than 50,000 Twitter accounts supporting ISIL, with an average of 1,000 followers each.

We welcome therefore the Security Council Resolutions on FTFs including resolution 2178, condemning Violent Extremism, and Underscoring the Need to Prevent Travel and Support for Foreign Terrorist Fighters.

International networks with linkages to organized crime are a critical lifeline for violent extremists and terrorists groups. These are not phenomena that a single state or a few states could deal with, but rather it demands a concerted global effort. It is therefore imperative for all member states to pool their resources and share intelligence to counter this issue.

Today, particularly in the Middle East and East and West Africa, as indeed in many other parts of the world,  violent extremism targets vulnerable and marginalized communities, children, minorities, women and girls. It is therefore imperative, that we proactively include and engage those entities of the United Nations System that deal with Children, Minorities, Women and Girls.

As comprehensively listed in the Secretary General’s plan of action, the areas of human development, the empowerment of women and youth, and strengthening good governance, human rights and the rule of law are of critical importance in the fight against terrorism and violent extremism. The eradication of poverty, in concert with increased social and economic opportunities is essential to counter human frustration and the threat of radicalization.

We need to sharpen and strengthen inter agency coordination methods, and to avoid practices that sometimes substitute process for outcome. Therefore Sri Lanka not only welcomes the necessary paradigm shift from Countering Violent Extremism to Preventing Violent Extremism, but also the ‘All of United Nations’ approach envisaged in this Plan of Action.

We agree with the Secretary General that the UN, as the foremost multilateral body, must act to prevent the further spread of violent extremism. In doing so, we need to adopt a comprehensive approach, which encompasses not only ongoing essential security based counter terrorism measures, but also systematic preventive measures which directly address the drivers of violent extremism at the local, national, regional and global levels.

It is vital therefore, that all Member States agree to a common strategic approach to fight violent extremism and terrorism, for this will not only send a clear message that such phenomena are unacceptable in all its forms and manifestations, but it will also allow states to take practical steps both individually and collectively, to prevent and combat it.

As noble as these objectives are, we must also avoid lapsing into bureaucratic and cyclical practices. States must demonstrate a requisite political will and commitment to close ranks, and make a determined and singular effort to overcome this challenge.

We must recognize that the building blocks for enhancing international cooperation in these areas are contained in the efforts undertaken by the General Assembly, in particular, the Ad Hoc Committee on the Measures to Eliminate International Terrorism which has already resulted in fourteen (14) sectorial conventions on the suppression of terrorism.

I must mention in this context that despite the support of most member states, and having been mandated by the General assembly to come up with a comprehensive legal framework, to fill possible gaps in the existing sectoral Conventions on terrorism, it is regrettable that there has been a failure to muster the necessary political will to break the current impasse surrounding the draft comprehensive Convention on International Terrorism. (CCIT)

It is pertinent at this time to recall that the conclusion of a CCIT was one of the key components of the 2005 Plan of action to combat Terrorism.

The role of the General Assembly over the years in standard setting has contributed markedly to the progressive development of international law and its codification. However it is time now to act as one body. Our efforts must not be one of business as usual.

Given the threats we face today, there is no time more urgent than now to make this happen. We are already seized of the building blocks to formulate a comprehensive response to these threats.

It is my delegation’s sincere hope that we can reject silos and work together as one body, to come up with a comprehensive plan of action to counter violent extremism and terrorism.

My delegation therefore, is pleased to support the resolution adopted today, to further consider the Secretary General’s Plan of Action at the Global Counter Terrorism Review to be held in June this year.