Remarks by H.E. Mohan Pieris, Permanent Representative of Sri Lanka at ceremony to handover artifacts to Sri Lanka recovered by the District Attorney of New York on Thursday, 25th March 2021 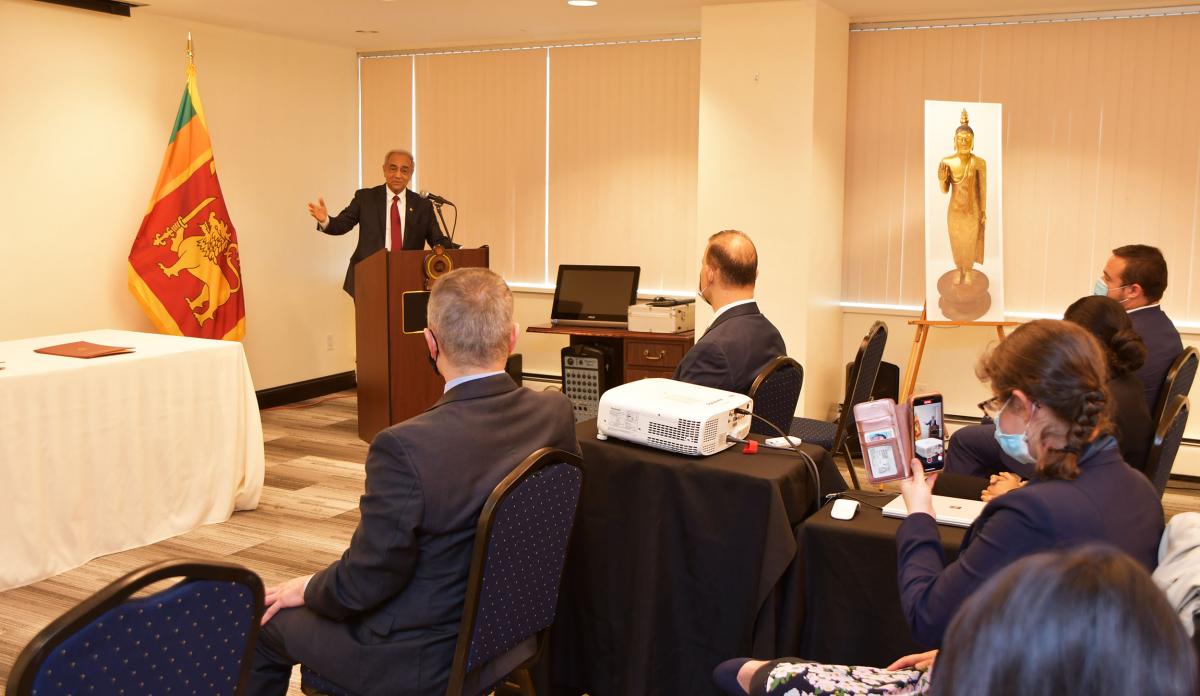 Members of the Antiquities Trafficking Unit;

I thank District Attorney Cyrus Vance Jr for his virtual presence today and valuable remarks on this occasion.

The island of Sri Lanka was once a port of call on ancient maritime trade routes, straddling the East and West. Ships from time immemorial have sailed through our waters to dock, before taking their cargo across to different destinations. As an island, we have attracted people from all parts of the world that have nurtured and influenced our country, and left its mark on our rich and diverse cultural heritage and traditions.

The city of New York has been the modern melting pot for nations across the globe. Staten Island has become home to a large Sri Lankan community with an area known as “Little Sri Lanka” in the areas of Tompkinsville and Stapleton along Victory Boulevard and Bay Street, where are some of the best restaurants to try Sri Lankan cuisine. The city of New York also has another connection to Sri Lanka.

Many New Yorkers know of Andrew Haswell Green, a civic leader and city planner, - sometimes called “the Father of Greater New York” for his work on Central Park, the NY Public Library and the MET among other projects. His brother- Dr. Samuel Fisk Green may not be as well known. Two years after completing medical school in New England- Dr. Green travelled to Sri Lanka, then called Ceylon as a Missionary and in 1847, he established the First Private Medical School in the North of Sri Lanka, with three medical students and taught on an American Medical School curricula. He established the Green Memorial Hospital, the first medical hospital in Sri Lanka, that still exists today.

I am therefore delighted that today, we mark a new and more recent connection with  the city of New York and Sri Lanka, with the recovery and restoration for the first time in the US, two historically valuable artifacts of the Lord Buddha dating to the 18th Century, as part of Sri Lanka’s rich religious and cultural heritage, thanks to the tireless work of the Manhattan District Attorney Cyrus Vance Jr and his team, the members of the Antiquities Trafficking Unit led by Asst. District Attorney Matthew Bogdanos, and officers of the Homeland Security Investigations, whom we are pleased to have present here with us today.

The two artifacts dating to the Kandyan period in the 18th Century represents a small period of a cultural heritage spanning over 4,000 years.

Cultural property is intrinsically related to the evolution of a nation’s identity. It forms a vital link to the past, where from the present and future may be nurtured and enriched. It is therefore a moment of joy and cultural renewal, when artifacts are recovered and returned to their rightful owners. Regrettably however, we are dismayed to know that for  every return, there are thousands that are stolen, looted and trafficked through underground and illicit channels.

In the case of Sri Lanka there has been the removal of cultural artifacts during the colonial era and the loss of cultural property during the more recent ethnic conflict, that ended in 2009, where the LTTE Terrorist were known to have sold artifacts, to fund their terrorist activities.

There have been antiquities looted from conflict situations, such as Syria and Iraq. I know that Col. Bogdanos has played a pioneering role with his work and investigations particularly in Iraq, that has led to the recovery of over 5,000 invaluable artifacts worldwide. I understand that the present investigations on a criminal network has resulted in the recovery of thousands of priceless artifacts from Asia and the Middle East, of which so far, 2 pieces from Sri Lanka have been recovered. I commend his passionate dedication and commitment to combat trafficking and work on the recovery of these invaluable artifacts.

There is a crucial need for countries to work together to confront the illicit traffic of cultural artifacts. Last year marked the 50th Anniversary of the 1970 Convention on the Means of Prohibiting and Preventing the Illicit Import, Export and Transfer of Ownership of Cultural Property, that has to date been ratified by 140 States.

Illicit traffic of all kinds, especially cultural property is rarely one way between 2 states, but involves multiple actors involving several states. In order to minimize this menace, every member of the UN needs to become a State Party and have compatible national legislation and develop appropriate national policy frameworks that could be implemented with relevant capacities and capabilities.

The UNESCO Database of National Cultural Heritage Laws also plays an important role to help combat this illicit traffic. More needs to be done. Many countries need to work to document and record all artifacts and objects in museums, temples, monasteries, palaces and private houses.

I wholeheartedly agree with District Attorney Cyrus Vance Jr in highlighting the importance of advocacy and awareness raising. This must also be done at the state and local government levels and the rural areas of many countries, where many temples and religious sites have become prey to criminal networks. Media, particularly social media may play a role to reach distant communities.

Some other measures could be expansion of specialised museum and heritage studies courses in countries. Issues such as return, repatriation, restitution and due diligence need to be grounded in all curricula. Greater capacity building of local administration, police and customs personnel is also essential.

In addition, the digitisation of collections in national institutions, as well as at sites and at the local community level and cultural mapping are some possible measures that could be used to safeguarding heritage of all kinds. In our own region of South Asia, there is a need for a regional thesaurus of heritage terminology that could be provide a shared understanding of object nomenclature between various cultural and heritage agencies, police and customs.

Finally, on the international level, greater collaboration is needed with Interpol, WCO, ICOM and UNESCO through appropriate capacity building in countries. This is not just the capacity to compile and inventorize- but more importantly to communicate and share information with one another. Information about stolen artifacts should travel faster than the objects themselves, to enable interception closer to the source or provenance.

We hope this small event would help draw more attention to the scourge of trafficking of cultural property and contribute in a small measure towards its combat, as well as highlight the importance of international cooperation.

We wish the District Attorney’s Office every success in their continued invaluable work that is playing a crucial role in the recovery of great treasures of cultural antiquity that are an essential part of every nation’s intangible heritage. Our Mission is available to assist you in any way we can.

May your pivotal work inspire others to rededicate themselves and work with greater commitment to combat trafficking of cultural property and return them to their rightful owners.