High Level Segment of the 2017 session of ECOSOC 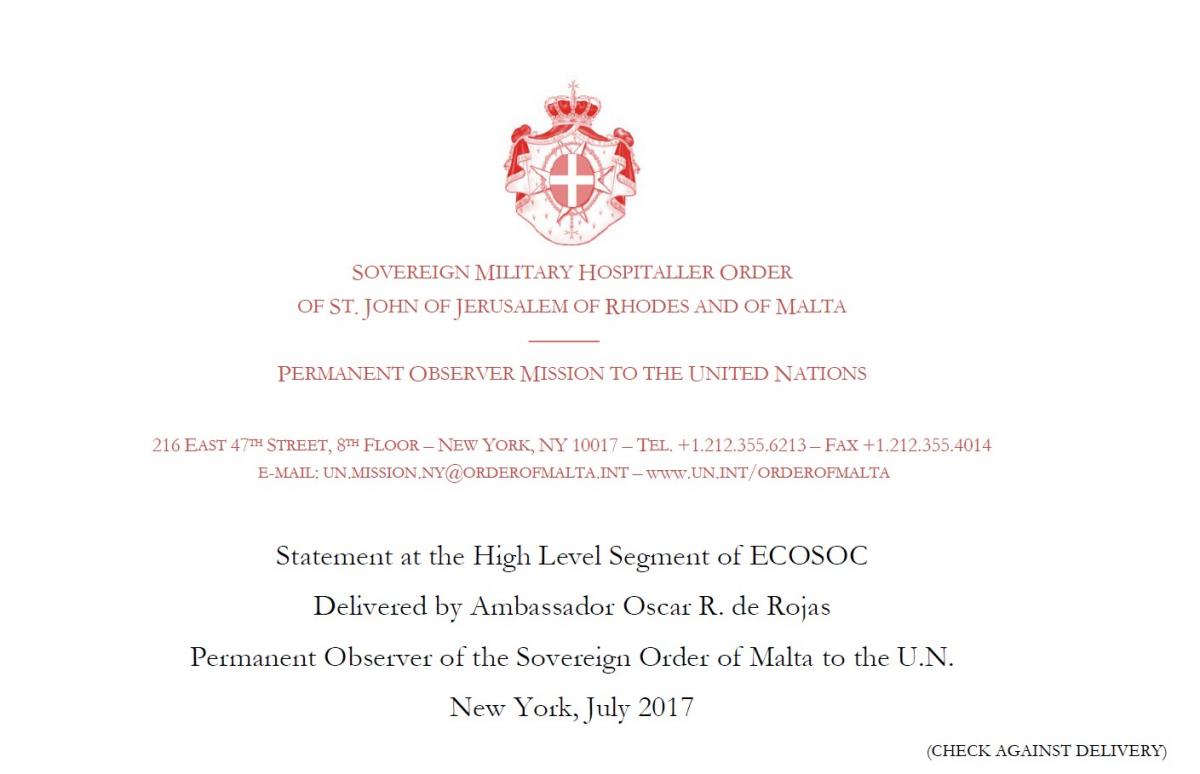 Thank you for giving us this opportunity to address the Council.

The Order of Malta has been committed to the care of the sick and poor for over 900 years. Today it operates over two thousand projects in over 120 countries around the world caring for and upholding the human dignity of those in need through medical, social and humanitarian works. The humanitarian assistance provided by the Order, including through its relief arm, Malteser International, is focused on the most marginalized and vulnerable persons around the globe irrespective of religion, ethnicity or nationality. The Order’s work truly echoes the 2030 Agenda for Sustainable Development to “leave no-one behind”, and is continually evolving to respond to the specific humanitarian challenges of our time, which  all too often are either caused or exacerbated by poverty.

As reported last year, the Order continues to devote a large part of its efforts to assisting refugees, migrants and internally displaced persons across the world, especially in the Middle East and across Africa, by offering first aid and emergency assistance, and providing long-term development projects in countries of origin, transit and/or arrival. Refugees fleeing Syria are met at the Malteser field hospital in Kilis on the Turkish border. Rescue teams in the Southern Mediterranean are the first to reach refugees and migrants traveling by boat. Asylum seekers on the European mainland receive medical care, legal assistance and take part in programmes organized by the Order to help them integrate with the local population.

Children in South Sudan are provided with school meals. Sanitation and water supplies in the Democratic Republic of the Congo, Kenya and Uganda have been improved through the Order’s interventions. These are just a handful of the recent activities that aim to tackle the humanitarian consequences of the current refugee emergency.

The preparatory session ahead of the Global Compact on Migration that took place in May was extremely encouraging as the international community sought to share strategies to recognise and harness the benefits of migration whilst addressing the negative drivers of it, especially climate change and natural and man-made crises, through poverty eradication and sustainable development. The Order welcomes the call for a change in the narrative of migration from discrimination and xenophobia to a recognition of the intrinsic human dignity, human rights and value of every refugee and migrant.

Another subject presently being considered at the U.N., the increase in human trafficking, especially sex trafficking as it relates to women and girls, and its correlation with the flows of migration is of great concern to the Order. As our Foreign Minister said a few weeks ago at a Global Conference Forum on Migration and Development in Berlin, “the Order of Malta, besides saving lives at sea in the Mediterranean, on board of Italian Coast Guard ships, and assisting hundreds of thousands of migrants in Europe, considers human trafficking a growing priority and intends to strengthen its commitments to tackle this phenomenon, at a diplomatic as well as an operational level.”  In light of this, the Order welcomes the forthcoming special meeting in September on the implementation of the Global Plan of Action to combat trafficking of persons and is following closely the formulation of a political declaration on the subject.

In conclusion, the Sovereign Order of Malta will continue this year, as it has for the last nine centuries, to help in the care of the poor and the sick in this boundless geography of need. It looks forward to collaboration with other international and local actors to effectively achieve the goal of long-term development and a global society that fully respects human dignity and the pursuit of the universal common good, in freedom, justice and solidarity.