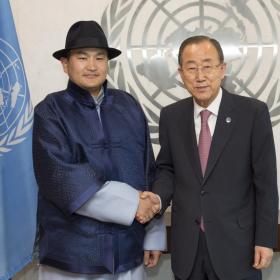 H.E. Sukhbold Sukhee, Ambassador Extraordinary and Plenipotentiary and Permanent Representative of Mongolia to the United Nations

Welcome to the website of the Permanent Mission of Mongolia to the United Nations!

The primacy of the UN as the world's most universal and legitimate international organization and a political center for global cooperation is indisputable.

Multilateral engagement in the UN system is one of the fundamental pillars of Mongolia’s foreign policy. Since becoming a UN member in 1961, Mongolia has been active across all the three main pillars of the UN, i.e. development, peace and security, and human rights. Constructive participation in the sessions of the General Assembly is at the heart of this policy. Mongolia has initiated and is the main sponsor of GA resolutions on a wide range of critical issues, such as the challenges facing landlocked developing countries, cooperatives in social development, the improvement of the situation of women in rural areas, UN Literacy Decade, support by the UN system of the efforts of Governments to promote and consolidate new or restored democracies, the 800th Anniversary of Mongolian Statehood, Mongolia’s international security and nuclear weapon-free status. We take an active part in the negotiations on the Security Council reform.

The main menu of our website reflects the priorities of Mongolia’s multilateral engagement in the UN which are socio-economic issues, including MDGs, promoting the interests of landlocked developing countries, social development, as well as UN peacekeeping, democracy, disarmament and non-proliferation.

The UN is one of our major partners in achieving national Millennium Development Goals. We have an intense and enduring cooperation with the UN agencies, funds and programmes, including its Development Programme, Children’s Fund, Population Fund, Human Settlements Programme etc. A valuable partnership is being developed with the newly established UN Women.

Mongolia advocates the interests of landlocked developing countries in the UN and beyond. In 2009, it initiated the establishment of an International Think Tank for the Landlocked Developing Countries.

Mongolia’s participation in UN peacekeeping operations (PKO) is an essential part of its contribution to the maintenance of international peace and security. We are currently participating in 7 UN mandated PKOs.

Democracy consolidation is another priority area of our cooperation. Mongolia is the first country in the world to adopt an additional Millennium Development Goal Nine (MDG9) on “Fostering Democratic Governance and Strengthening Human Rights and Zero-Tolerance to Corruption”. We served on the Advisory Board of the UN Democracy Fund. Under the project implemented together with the UNDP to follow up on the activities of the 5th International Conference of New or Restored Democracies (ICNRD-5), Mongolia formulated a National Plan of Action to consolidate democracy and developed nationally-owned Democratic Governance Indicators.

I hope that you will find this site a helpful tool in learning more about Mongolia’s multilateral engagement in the United Nations. We are proud to be at its forefront.