We have witnessed inspiring calls to action this week at the UN in pursuit of a more vibrant and resilient world. But – with few exceptions – those contributions have not come from leaders; they have come from young people. Young people who are tired of watching helplessly as their future is hijacked by nations too blind to the catastrophe at our doorstep or too impotent to do what must be done. Young people living in terror at what the coming years will bring, but who are choosing to speak out rather than cower in fear. Young people who know a secure and prosperous future remains within reach, but only if we, as leaders, choose to act – and act now – to save them.

A few hours ago, the world’s leading climate scientists – through the Intergovernmental Panel on Climate Change – issued a report that adds a new dimension of horror to the world our children and grandchildren will inherit.

They have warned that global warming is turning our seas into a huge potential threat to humanity, saying that global average sea levels could increase by up to 1-point-1 metres by 2100, in the worst warming scenario. This is a rise of 10 centimetres on previous IPCC projections because of the larger ice loss now happening in Antarctica.  This is heart-breaking news for tens of thousands of Fijians in our coastal areas, and thousands more across the Pacific. And it adds considerable urgency to the mission of Fiji’s Climate Relocation and Displaced Peoples Trust Fund for Communities and Infrastructure which I launched Monday night here in New York.

I urge everyone: read this report. It is from the top minds in their scientific fields. I say to any living in denial of the climate emergency, some of whom sit at the apex of certain governments: You readily listen to the scientists and take heed of the best research available in every other field of human endeavour. So why do you refuse to listen to the scientists on climate change?

One of our youngest climate warriors, young Timoci Naulusala, makes this case far better than I ever could. He watched his village be ripped to pieces in Cyclone Winston and he is now demanding the world act to spare other youth the same suffering he personally endured.

Excellencies and fellow leaders, if we fail to act, Timoci’s worst fears will be realised, as we will condemn him, and all young people, to a hellish future. For all 195 member-states of the United Nations, this is our moment of truth, the defining issue that will determine the course of history. Previous generations fought each other to uphold their own interests. But now the world must unite around our common interests to fight a more powerful enemy – a monster we created ourselves – a heating planet staggering under the excesses of all who have taken its resilience for granted.

Every nation has a role to play but only the industrial nations have the economic capacity and advanced technical know-how to lead the world to victory in this struggle. Defeat is not an option. So to those who did not come to New York this week with fresh plans to tackle the climate crisis or who came merely out of curiosity to observe, again, please examine the evidence - the facts. And for God’s sake face up to your responsibility to lead.

We must also bring oceans into the heart of the UNFCCC process at the “Blue Cop” – COP25 in Chile in December.  Because you can’t have a stable climate without a healthy ocean.

My message to my own people and especially young Fijians is this: I hear you. Your nation – your government – is doing everything it can to get the world to confront the climate threat. I took on the Presidency of COP 23 – not for prestige – but to play our part in ensuring your survival and everything we hold dear – not only our precious surroundings but our culture and our traditions. To protect the dreams and aspirations every Fijian has for themselves and the hopes they have for their children.

Small as we are, Fiji will fight. We will keep being a voice for more climate ambition, more climate action. We will continue to advance our case in the great forums of the world, not only on behalf of Fijians and other Pacific Islanders but the climate-vulnerable everywhere.

This week, Fiji answered the call of the UN Secretary General to come to New York with more ambition to reduce our own emissions. These amount to only 0.04  per cent of total global emissions but we will be lodging a revised NDC in the New Year which will include a commitment to achieve net zero emissions by 2050.  Because leadership is about leading by example, not lecturing others or expecting them to shoulder the burden alone.

Friends, COP is not the first time Fiji has shown leadership in the world. For four decades, we have served the world through our contribution to UN Peacekeeping. Our troops have travelled across the globe to some of the most violent trouble spots and placed their lives on the line to protect the innocent. More than 60 Fijians have paid the ultimate sacrifice – and it has been a sacrifice not only for their loved ones but for our nation of less than a million people. And we have done it proudly because we see it as our duty to serve.

With the assistance of our development partners, we are establishing a new training centre in Fiji for our peacekeeping activities and to provide a rapid response to climate-induced disasters in our own region. Fiji will continue its contribution to UN peacekeeping better trained and equipped troops. Especially as conflict zones feel the stress of climate impacts, our peacekeepers will be even better prepared to assist affected communities.

And in the climate fight, we’ve launched a host of initiatives to serve our people, the region and the world:
- We are working to reduce the emissions of our transport sector on land and at sea.
- We are working with our Pacific neighbours to transform our shipping fleets from diesel to hybrid and make them more efficient.
- We are working to protect our vulnerable coastal communities and towns from the rising waters and extreme weather events, including our global gateway, Nadi.
- We are working to ensure that when disaster strikes – like Cyclone Winston three years ago that cost us one third of our GDP in 36 hours – that we have access to appropriately packaged insurance to bounce back.
- We are working to access adequate and affordable finance from public and private sources for climate adaptation.
- We are bringing solar power to communities that are off the national grid and the first of these projects - on Vio – will be the start of a program that we hope can be replicated throughout the Pacific.
- We are working to secure our infrastructure from extreme weather events, such as putting power lines underground and raising roads along our shores that are already threatened by the rising seas.
- And we started building back better after Winston and we will continue to build back better so that homes, schools and public infrastructure are more resilient.

We are relocating threatened communities to move them out of harm’s way. Our Climate Relocation and Displaced People’s Trust Fund is operational and we are seeking global support to assist our people who are displaced and to move the infrastructure they rely on such as schools, health centres, roads, bridges and public utilities, such as electricity. We are raising money ourselves in Fiji for this fund through an environmental levy but this effort needs to be scaled up.

For me personally, one of our most exciting initiatives is to preserve and plant more of our forests and mangroves and monetise these through carbon trading arrangements in the international marketplace. As well as reducing our own carbon footprint and being an important component of our revised NDC, we want to fire the imaginations of our people and encourage them to protect our trees, mangroves and coral as well. Because they will not only have natural value but be worth serious dollars and cents.

Fiji is also becoming one of the first countries to enshrine our implementation of the Paris Agreement and other strands of our climate campaign in a new national law. The Climate Change Act gives us the legal tool we need to place climate action and ambition at the centre of our national life. When it is passed by our Parliament within the next few months, decisions by government and the private sector will have to factor in climate change and other laws will be amended to fall into line with the Act. The draft legislation is now on-line for public feedback on the Fijian Government’s website page. It is ground-breaking and something other countries can emulate – state of the art NDC enhancement guided by a long-term vision and backed by force of law that reinforces Fiji as a global leader in the climate fight.

All of these measures are part of a holistic response to secure the future of every Fijian. However dire the climate threat may be, our people can rely on my government to do everything we possibly can to protect them, especially in times of crisis.

For 13 years, empowering our people has been the hallmark of my government.

- first levelling the playing field so tha every Fijian enjoys equal opportunity in our new democracy.
- Providing free education for the first time so that no Fijian child is left behind and we end the heartbreak of parents unable to send their children to school.
- Providing more access to higher education with scholarships and tertiary loans, and training tradespeople, and building national capacity in our network of technical colleges.
- Providing better access to health care, plus free medicine for low income earners, and entering into public-private partnerships to improve our hospitals.
- Raising our standards of governance and accountability, fighting corruption and prudently managing the nation’s finances.
- Ensuring that those living in rural and maritime areas enjoy the same access to services as those in our towns and cities.
Providing incentives for investment and creating a record number of jobs.
Harnessing the might of multilateralism through deeper partnerships with and leadership within financial institutions and development organisations.
- And carrying the Fijian Made brand of quality goods and services to markets all over the world.

Fiji’s willingness to give our time and energy to answer critical global calls to action, whether in peacekeeping, addressing climate change, or preserving our oceans, has earned us unprecedented respect. The reason these achievements have ultimately been possible is because my government has united the country, empowered our people and given them a sense of purpose. And they will not permit those who would seek to divide us and take Fiji backwards to ever succeed.

But all of that progress remains at-risk if the world does not heed the voices of our young and summon the collective will to confront the climate threat.

It is our duty, as the leaders of our own generation, to secure the future of our planet and our only home - for them and the generations to come. And to lay out a vision of the great opportunities that await the world when we embrace a sustainable energy future and a sustainable future for all living things. 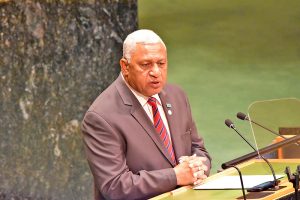