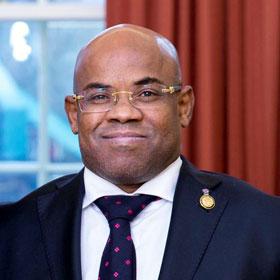 Before the assumption of his duties as Ambassador of Djibouti to the United Nations, WTO and Switzerland, he has served as Special Envoy to the IGAD-led Process for Somalia as a member of the IGAD Facilitation Committee.

In that position, he was a key member of the Djibouti Ministerial delegation to the special session of the Security Council on Sudan and Somalia held in Nairobi (Kenya).

The Djibouti delegation presented a strong case for International Community in general and the Security Council in particular to remain engaged in Somalia in view of the extraordinary security challenges posed by the free circulation of weapons, the large number of uncontrolled militia and technical.

Pursuing the same objective, the Ambassador has also been instrumental in the preparation of the Somali case when he accompanied the newly elected Somali President to the Peace and Security Council at its 18th session in Addis Ababa (Ethiopia) in 2004.  He has also briefly served (April-October 2001) as Special Envoy to the IGAD led Sudan Peace Process.  In October 2001, he was appointed as Secretary to the National Committee on Terrorism formed on the basis of Security Council resolution 1373.

In April 2002, he is designated as member of the IGAD technical committee established by the IGAD council of Ministers in Somalia to do the necessary preparation for the National Conference for peace in Somalia.  Its mandate included the delicate task of determining criteria for participation, defining a draft agenda of the discussion to be tabled before Somalis and a timeframe.

From January to August 2002, he has served as a member of the technical secretariat that assisted the National Committee chaired by the Minister of Foreign Affairs which planned and organized the national reconciliation conference for peace in Somalia in Arta, Djibouti.

In January 2008, the Ambassador was appointed as Head of a special diplomatic mission, as agent of the Republic of Djibouti to the International Court of Justice.

In his capacity as Ambassador and Chairman of various Committees, the Ambassador has made several presentations at the invitation of academic and diplomatic institutions on conflict-resolution, human rights, maritime security, and piracy, etc.

The Ambassador holds a Masters in British and American Literature and Civilization, and has received a training in philosophy.  He made a comparative analysis of the works of Friedrich Nietzche and Thomas Carlyle “Nietzche vs Carlyle: setting the record straight on the judgement of the philosophy towards the Scottish “prophet”.

The Ambassador possesses a very good knowledge of two UN working languages (French and English) and has an acceptable command of written Spanish and Arabic.

Ambassador Doualeh was born on December 27, 1968, and is married with 4 children.

Ambassador and Permanent Representative of the Republic of Djibouti

to the United Nations, New York

I wish to extend a warm welcome to you all and I hope you would have a wonderful experience visiting our website.

Djibouti cherishes the values of peace, tolerance, mutual understanding and is deeply committed to the Charter of the United Nations. Its commitment to multilateralism translate into action through its contribution to peaceful processes and mediation efforts in the region and its participation in peacekeeping operations in various conflict theaters.

Djibouti is host to the Regional Organization IGAD (Intergovernmental Authority on Development) and further supports the strengthening of cooperation between the United Nations and regional organizations and would be willing to contributing to on-going efforts to develop partnerships and synergies.

Djibouti is a peaceful stable and friendly country and has over the past few years embarked upon massive scale development infrastructure projects. Its economic prospect remains favorable and it is steadily transforming itself into a crucial hub for transport in the region and beyond. It has entirely participated in the discussions leading up to the adoption in September of the 2030 Agenda for sustainable development.

Djibouti, as stated by the President of the Republic of Djibouti, His Excellency Mr. Ismail Omar Guelleh, will endeavor to make sustained progress in SDGs and hopefully complete a virtuous cycle of sustainable economic growth and human development.

This website would help keep track of the various contributions by the Representatives of the Permanent Mission of the Republic of Djibouti under the various agenda items and themes in the U.N.

It would also endeavor to provide updated information about our country pertaining to society, tourism, economy and politics.

Thank you for visiting our website and enjoy the experience!