UN Secretary-General Ban Ki Moon announces to the UN General Assembly his appointment of the Philippines’ Ms. Heidi S. Mendoza, Commissioner of the Philippine Commission of Audit, as Under-Secretary General of the Office of Internal Oversight Office. Ms. Mendoza is the first Filipino ever to be appointed as Under-Secretary General in the UN Secretariat.

Ms. Mendoza is the first Filipino ever to be appointed as Under-Secretary General in the UN Secretariat.

Ambassador Lourdes O. Yparraguirre, Permanent Representative of the Philippines to the UN, welcomed the appointment and thanked the regional groups of the UN for their endorsement and the Member States for their affirmation of the appointment. Under UN rules, the appointment by the Secretary General is submitted to the General Assembly for approval.

Ambassador Yparraguirre said, “it is a great honor for the Philippines that a highly-qualified woman from the developing world was chosen to serve in a senior position in the United Nations.” She added that Commissioner Mendoza’s “qualifications and 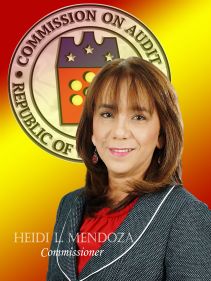 wealth of experience coupled with her commitment to excellence and integrity, make her a wise choice for the job. Her qualifications are crucial at this juncture in the history of the UN which is celebrating its 70th anniversary, is moving forward with an ambitious 2030 Agenda for Sustainable Development, and is pursuing a platform of reforms in various fields of UN work.”

She also stressed that “good governance, rule of law, and effective, accountable and transparent institutions within the UN itself are necessary for ensuring that the UN continues to be a credible champion in the global fight against corruption and achieves its lofty goals.”

The United States and the Nordic countries of Denmark, Finland, Iceland, Norway and Sweden also hailed the appointment. Speaking on behalf of the United States, Ambassador Isobel Coleman, Ambassador for UN Management and Reform, said that they “look forward to working with Ms. Mendoza” and are “committed to ensuring a strong OIOS to carry out robust audits and effective investigations to ferret out waste, fraud and corruption.” In a similar vein, Sweden, speaking for the Nordic countries, said they “are confident that Ms. Mendoza will lead the OIOS effectively and efficiently” and noted that “an operationally independent OIOS is key to … rebuilding the confidence among the Member States that the office can play its role in protecting the integrity of the United Nations and promoting accountability within the organization.”

Earlier, Secretary of Foreign Affairs Albert F. Del Rosario hailed the appointment of Ms. Mendoza, saying that “the appointment of Ms. Heidi Mendoza as UN Under-Secretary-General of an important office that aims to be an agent of change to promote responsible, accountable, and transparent administration of UN resources, is a true testament of her skills and integrity as a public accountant.”

Ms. Mendoza’s appointment comes at a time when the UN has been rocked by allegations of corruption and bribery, following the arrest of John W. Ashe, President of the UN General Assembly from 2013-2014 and former Permanent Representative to the UN of Antigua and Barbuda, on 06 October 2015. He was arrested along with another diplomat, Francisco Lorenzo, a Deputy Ambassador of the Dominican Republic’s Permanent Mission, on charges of corruption and bribery relating to, among others, a proposal to build a UN Conference Center in Macau. The Secretary General has already ordered the OIOS to conduct an internal investigation into the matter.

Sweden also expressed the need for the OIOS to look into allegations of misconduct in relation to UN peacekeeping operations in the Central African Republic.

Ms. Mendoza is expected to handle these issues as she begins her term on 15 November 2015. As per UN regulations, her appointment is for a fixed term of five years without renewal. As the UN’s Under-Secretary General for Internal Oversight, she will be responsible over the resources and staff of the organization through internal audit, monitoring, inspection, evaluation and investigation services. END.