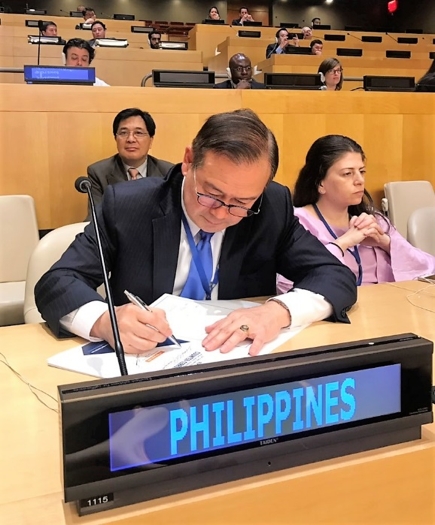 NEW YORK, 28 September 2018 – The Philippines on Friday joined a global alliance of countries seeking to end terrorism with its signing of an international instrument at the United Nations.

The Philippines signed the Code of Conduct Towards Achieving a World Free of Terrorism in ceremonies at UN Headquarters on the side of the 73rd Session of the General Assembly.  Ambassador Teodoro L. Locsin Jr., Permanent Representative to the United Nations, signed on behalf of the Philippines.

“In signing this instrument, the Philippines underscores its will to fight against terrorism and address conditions conducive to its spread, and signifies its commitment to implement its existing commitments in the sphere of counter-terrorism,” Ambassador Locsin said.

The Code of Conduct is a voluntary and non-legally binding instrument that reinvigorates the collective commitment to coordinate and collaborate in the fight against terrorism; reinforces mechanisms for regional and international cooperation; and demands a coherent and comprehensive response from the UN. (END)