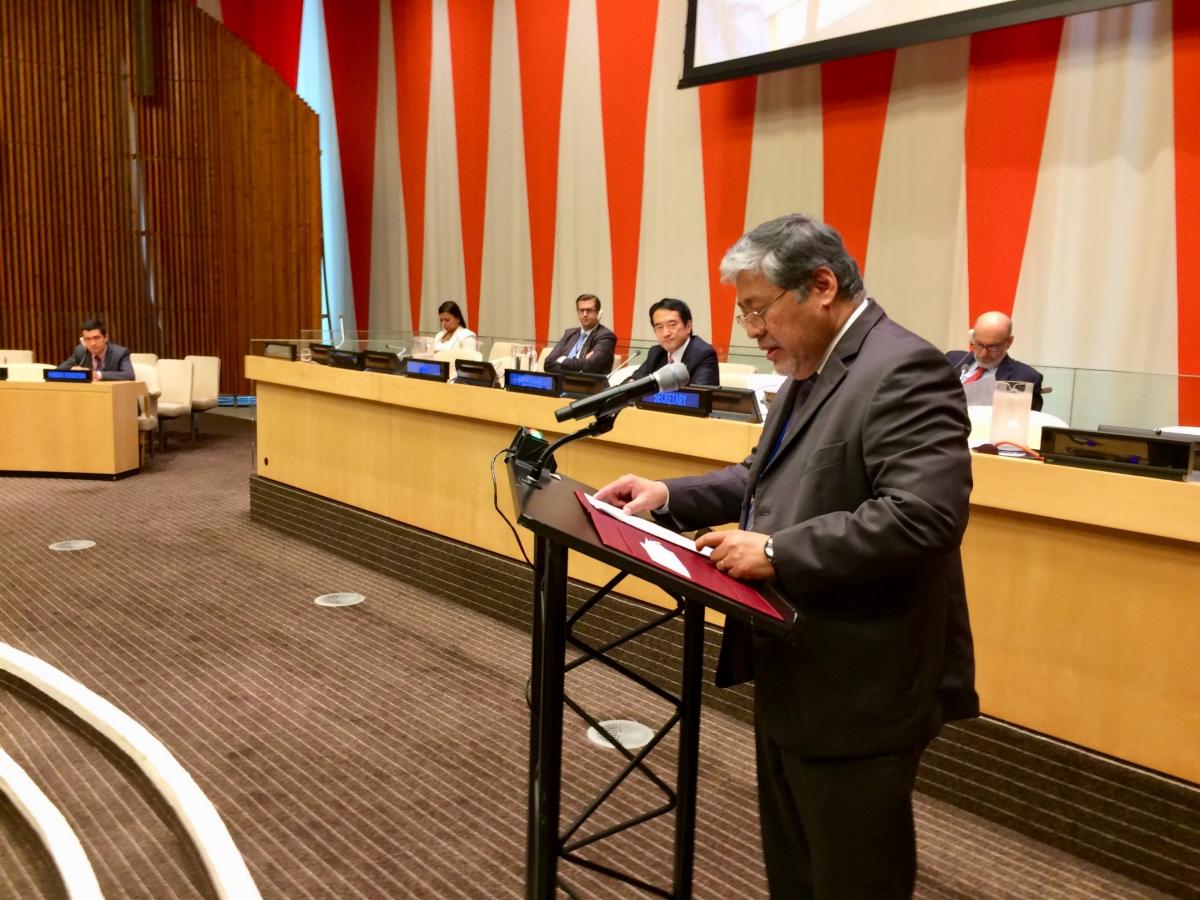 26 September 2018, ECOSOC Chamber, UNHQ, New York City – The Philippines underscored the responsibility of nations to protect gains from a devastation that would result from a nuclear accident at the United Nations’ High-level Plenary meeting to commemorate and promote the “International Day for the Total Elimination of Nuclear Weapons” today.

“The prosperity, the environment, and peace that we endeavor to nurture can be annihilated in the blink of an eye with a single nuclear incident. It is only rational for humanity to eliminate this nuclear threat,” Foreign Affairs Undersecretary Enrique A. Manalo said in the Philippine statement.

The Undersecretary highlighted the need for the total elimination of nuclear weapons, particularly at a time when the United Nations has already invested so much in development, the environment, and peace.

Undersecretary Manalo cited the 13 Practical Steps and the 64-Point Action Plan that was agreed in the 2020 NPT Review Conference, and called on nuclear weapon states to do its part to ensure the implementation of these measures towards the ultimate goal of nuclear disarmament.

Undersecretary Manalo also welcomed the new Agenda for Disarmament of UN Secretary-General António Guterres, saying that the Philippines shared the conviction that “nuclear weapons are never to be used again under any circumstances” and that the “total elimination of nuclear weapons remains our priority.”

The General Assembly declared the International Day for the Total Elimination of Nuclear Weapons in December 2013 as a follow-up to the high-level meeting of the General Assembly on nuclear disarmament held on 26 September 2013. The Assembly called upon Member States, the United Nations system and civil society, including non-governmental organizations, academia, parliamentarians, the mass media and individuals, to commemorate and promote the International Day through all means of educational and public awareness-raising activities about the threat posed to humanity by nuclear weapons and the necessity for their total elimination in order to mobilize international efforts towards achieving the common goal of a nuclear-weapon-free world.

On 20 September 2017, Secretary of Foreign Affairs Alan Peter Cayetano signed at the UN the Treaty on the Prohibition of Nuclear Weapons that outlawed nuclear weapons.  It was a landmark agreement that fortifies the nuclear disarmament architecture and represents the universalization of the Philippines' hope for the elimination of nuclear weapons, in line with the specific provision of the Philippine Constitution and the Treaty on the South-East Asian Nuclear Weapon-Free Zone. END