PHILIPPINES AND AUSTRALIA READY FOR COMPREHENSIVE PARTNERSHIP, TO COOPERATE ON IRREGULAR MIGRATION 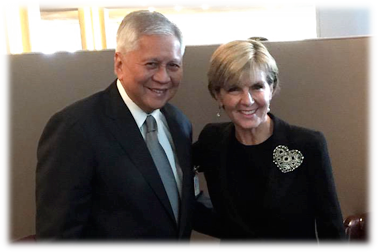 The Secretary also expressed his congratulations to the new government of Prime Minister Malcom Turnbull, as well as for the reappointment of FM Bishop.

“This Comprehensive Partnership reflects the reality of our strong relations,” FM Bishop said. She explained that PM Turnbull looks forward to meeting President Benigno S. Aquino III at the 2015 APEC Economic Leaders’ Meeting to be held in November in Manila.

The two Foreign Ministers also vowed to work together to address the complex issue of irregular migration and migrants in distress.

FM Bishop reiterated the invitation for the Secretary to come to Australia for the Philippines-Australia Ministerial Meeting in February 2016 when the two countries will celebrate the 70th Anniversary of diplomatic relations. END