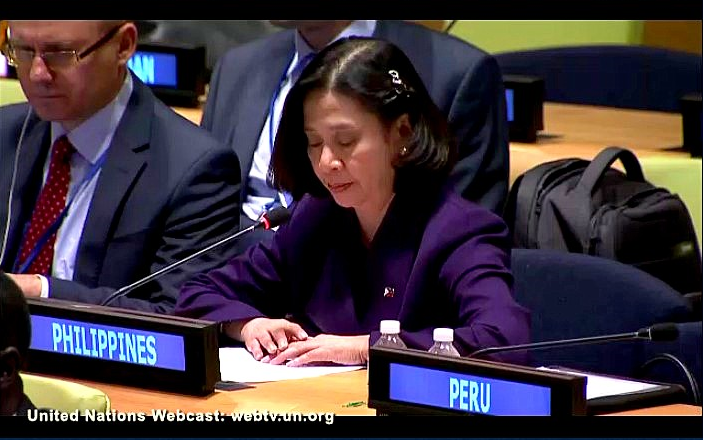 Addressing the Legal Committee of the UN General Assembly at yesterday’s debate on the rule of law, Ambassador Lourdes Yparraguirre, the country’s Permanent Representative to the UN, recalled that the root cause of the disputes is China’s claim of “indisputable sovereignty” over almost 90 percent of the South China Sea, as enclosed by its so-called Nine-Dash Line.

“The so-called Nine-Dash Line is an excessive and expansive claim, and does not have legitimacy under international law, including the UN Convention on the Law of the Sea (UNCLOS),” Ambassador Yparraguirre remarked.

She highlighted UNCLOS as a distinct achievement of the UN’s multilateral treaty process, and reiterated the Philippines’ total commitment to its peaceful and rules-based approach to the resolution of maritime disputes.

“Territorial or maritime claims should never be asserted through intimidation, coercion or force, including through massive, large scale ocean filling or reclamation or illegally creating artificial islands in the high seas and in the exclusive economic zone of another coastal State,” Ambassador Yparraguirre emphasized.

China has undertaken accelerated ocean-filling or reclamation in the last two years after the Philippines’ initiated UNCLOS arbitration proceedings against it, preventing the Philippines from accessing its traditional fishing grounds and from enforcing its relevant laws within the West Philippine Sea.

Ambassador Yparraguirre added that, “These illegal actions have destroyed corals reefs and their priceless marine ecosystem which took millions of years to form, and violate our mandate to protect the marine environment under Articles 192 and 194 of UNCLOS.”

In addressing the arbitration tribunal process, the Ambassador stressed that over two decades of bilateral consultations and negotiations between the Philippines and China have proven futile and one-sided. This has made arbitration, a third-party dispute settlement process, necessary. The arbitration panel is composed of outstanding experts on UNCLOS who can successfully guide all parties to the correct interpretation of the principles of international law including UNCLOS in order to resolve the disputes.

“The rule of law … anchors relations between and among States on the basis of respect and sovereign equality, and allows for an environment of genuine peace and security to flourish,” Ambassador Yparraguirre concluded.”

The video recording of the Philippines’ full statement, together with the exchange between the Philippines and China in the exercise of their rights to reply, may be accessed via the UN’s webcast at www.un.org under the deliberations of the Sixth Committee’s 8th meeting dated 16 October 2015. END