PH renews its commitment to promotion of children’s rights 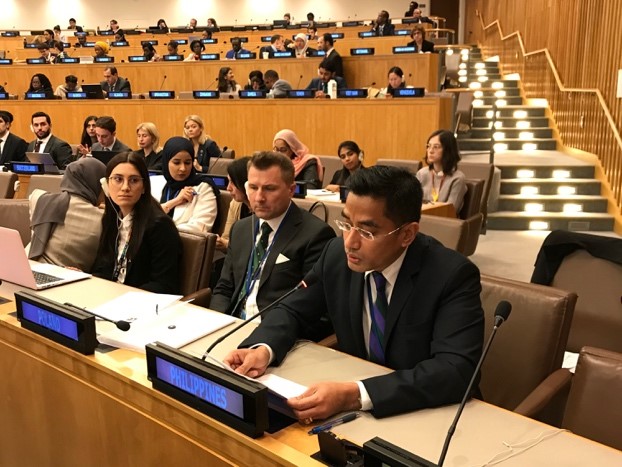 11 October 2019, New York – The Philippines reaffirmed its commitment to the promotion, protection and fulfillment of the rights of children at a plenary meeting at the United Nations General Assembly on 10 October 2019.

In his statement, Minister Ariel R. Peñaranda underscored the importance of a state’s responsibility to protect the most vulnerable members of its society, particularly youth and children. “A society’s dynamism and survival rests upon the well-being of its youth,” said Min. Peñaranda.

He also highlighted national efforts commemorating the 30th anniversary of the Convention on the Rights of the Child, including the Department of Education’s awareness-raising social media campaign and the Ako Para se Bata (or Me for the Children) International Conference in Manila which will showcase the role of teens in addressing violence against children.

Ensuring that children are protected in situations of armed conflict is a top priority for the Philippines. This year, Congress passed into law the Special Protection of Children of Armed Conflict Act and signed the Implementing Rules and Regulations.

Because children of migrants continue to face discrimination and may even be at risk of stateless, “the Philippines is pleased that the promotion of the rights of the child is one of the guiding principles of the Global Compact for Migration,” said Min. Peñaranda. END