Philippine Mission to the United Nations 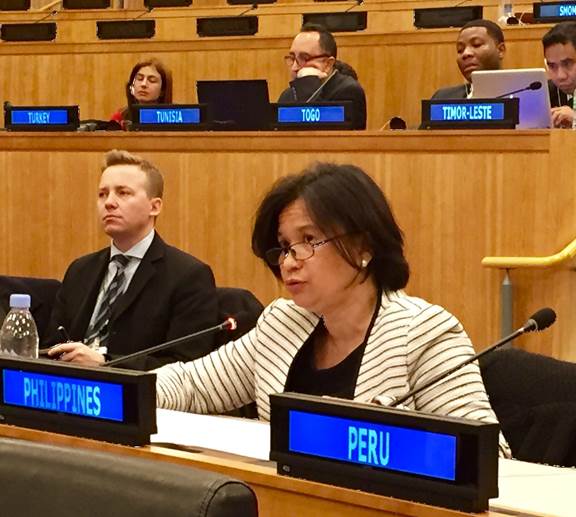 NEW YORK, 18 February 2015 – The Philippines continued its strong call for reforms in United Nations peacekeeping operations to ensure the safety and security of peacekeepers.

Speaking at the 2015 Substantive Session of the Special Committee on Peacekeeping Operations, the Deputy Permanent Representative of the Permanent Mission of the Philippines to the UN in New York, Irene Susan B. Natividad, outlined the Philippines’ proposal to improve peacekeeping missions amidst more complex and complicated operational environments for peacekeepers.

She said new elements not contemplated during the formulation of mandates –such as Anti Government Armed Elements (AGAEs) and pandemics – which continue to undermine the implementation of UN peacekeeping mandates must be taken into consideration.

Ambassador Natividad also stressed the need for missions to provide truthful and timely information to UN Headquarters and the Permanent Missions of concerned Troop and Police Contributing Countries.

“The Philippines stresses the need for peacekeeping missions to acquire improved safety and security capacities with a strategic and holistic view on a wide range of issues, including mission leadership, chain of command, rules of engagement, pre-deployment assessment and training, policies and standards, as well as the use of protective equipment and high-level technological assets. Certainly, we underscore the importance of the timely provision of adequate self-defence and related equipment to fulfil the peacekeeping mandate in accordance with United Nations standards to ensure the safety and security of UN peacekeepers,” she added.

The Ambassador said capacity building before, during and after deployment, is a key area of activity that must be sustained, adding that capacity building will be further improved at policy level through the implementation of equitable regional representation in the UN Department of Peacekeeping Operations and the Department of Field Support.

On the provision of adequate resources to fully support peacekeeping efforts, the Philippines called for implementation of the agreement to increase the standard rate of reimbursement to Troop Contributing Countries, as well as payment of risk premiums to contingents that operate without restrictions in accordance with the arrangements stipulated in UNGA Resolution 67/261. END