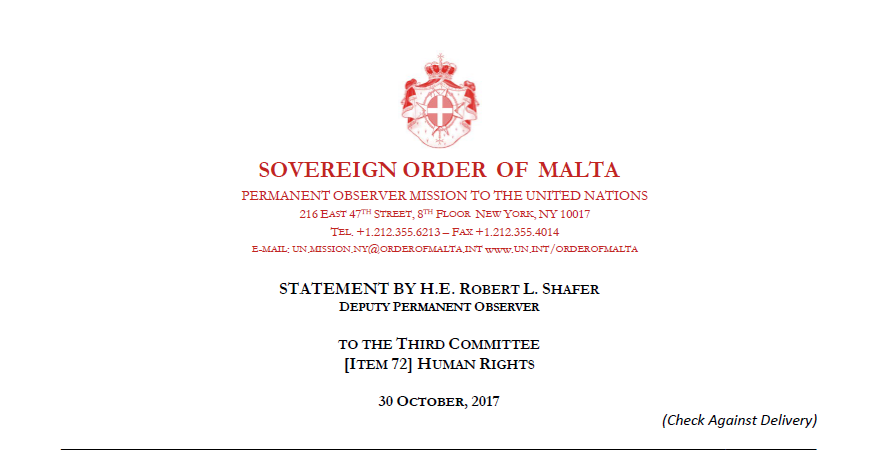 Thank you for this opportunity to speak on behalf of the Sovereign Order of Malta about the increasing violations of international humanitarian law by the targeting of civilians in the context of armed conflicts.   This is a crisis that has been of utmost importance to the Order of Malta for a number of years.   Indeed, in 2009, the Order’s Grand Hospitaller, Albrecht Freiherr von Boeselager, now Grand Chancellor, was invited by the President of the Security Council to speak on the “Protection of Civilians in Armed Conflicts’” from a personal perspective from the field. He warned that refugee camps had been the target of military raids and that humanitarian aid workers “have been the deliberate targets or incidental victims of these attacks.”

Sadly, the atrocities that he spoke about eight years ago are even more widespread today. The actions violated the basic principles of international humanitarian law, including the Fourth Geneva Convention.   Citizens continue to bear the burden of conflict atrocities.   And there are far reaching impacts forcing global displacement of peoples, economic crises, food shortages and other humanitarian crises.

The mission and work of the Order of Malta supports Security Council resolution 2286, which reaffirms the need to ensure respect for international humanitarian and human rights law and to facilitate the activities of neutral and independent humanitarian organizations.

For more than 900 years, the Order of Malta has been such an organization whose mission is to provide help to the sick, the needy and the most disadvantaged in society.   By virtue of its sovereignty and neutral and non political nature, the Order is able to intervene in difficult humanitarian situations.   Its medical and relief professionals are able to provide emergency aid for refugees and the displaced living through war and conflict.

As we speak, the Order of Malta is continuing its 900 year old mission in more than 120 countries.   Its worldwide humanitarian relief service, Malteser International, provides a wide range of medical and social programs in response to the armed conflicts and natural catastrophes that engulf our world with the greatest displacement of peoples in more than 50 years.

The Order is responding to these extraordinary problems and urgent humanitarian issues speedily, professionally and impartially, just as it has responded since the twelfth century.