Establishment of diplomatic relations with the Federal Republic of Germany 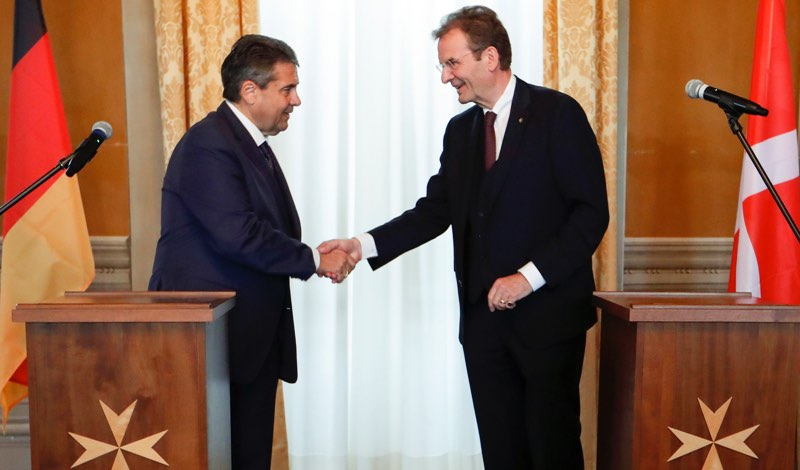 On 15 November 2017, the German Foreign Minister, H.E. Sigmar Gabriel, was received in Rome, at the Magistral Villa, by the Grand Chancellor of the Order, H.E. Albrecht Freiherr von Boeselager and, at the end of the talks, the establishment of diplomatic relations was officially announced between the Sovereign Order of Malta and the Federal Republic of Germany. Minister Gabriel said, that the decision of the German government wants to represent "the great appreciation for the work that the Sovereign Order of Malta carries out in 120 countries all over the world in the medical, social and humanitarian fields; for his commitment to the rescue and integration of migrants and refugees, as well as the special role of his diplomacy, committed to help the most needy on the planet".

The Minister also recalled that "the Order of Malta is one of the most stable institutions of the German civil society with its hospitals, social services and relief services". Among the topics discussed, during the meeting, were the very serious humanitarian emergency in some of the most affected areas by wars and socio-economic crises; the constant and fruitful contribution of Malteser International, the Order of Malta's international relief agency; assistance to refugees and to the most vulnerable and marginalized populations afflicted by war, persecution, disease and malnutrition; the rescue activity in the Mediterranean Sea of ​​migrants from Libya, Syria, Afghanistan, Iraq; and the decades-long experience of the Order of Malta in Germany in the continuous assistance and development of programs for the integration of migrants, without discrimination deriving from their migratory status. Currently the Sovereign Order of Malta has diplomatic relations with 107 States.