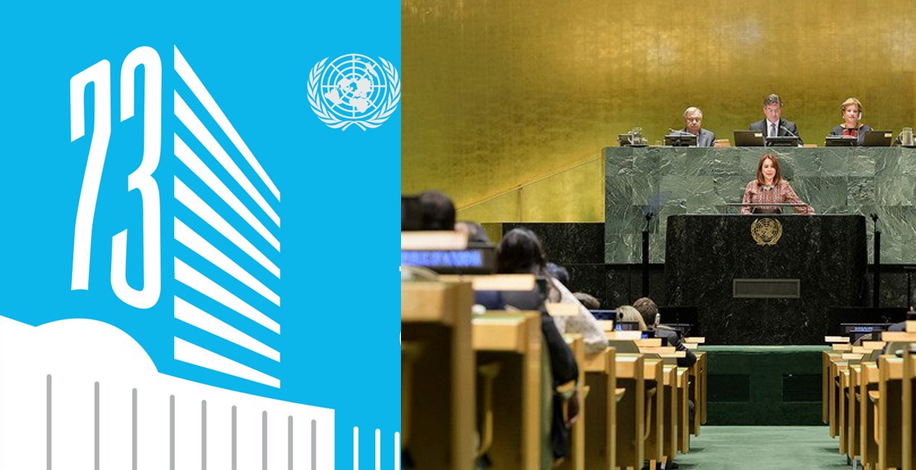 The General Assembly is one of the six main organs of the United Nations, the only one in which all Member States have equal representation: one nation, one vote. All 193 Member States of the United Nations are represented in this unique forum to discuss and work together on a wide array of international issues covered by the UN Charter, such as development, peace and security, international law, etc.

On September 17th, 2018, the United Nations General Assembly closed its 72nd Session, which put the theme "Focusing on People: Striving for Peace and a Decent Life for All on a Sustainable Planet”, chosen by the president of the GA Miroslav  Lajčák at the center of its works.
The 73rd session of the United Nations General Assembly (UNGA73) opened on the 18th of September 2018 with the overarching theme:  "Making the United Nations relevant to all people: global leadership and shared responsibilities for peaceful, equitable and sustainable societies". The first day of the high-level General Debate took place on Tuesday, 25 September 2018 and lasted until Monday 1 October.

This years session will be presided by Ms. María Fernanda Espinosa Garcés, Ecuadorian Foreign Minister and also the first woman to serve within this capacity from the Latin America and Caribbean region. She is also the first woman to be named Permanent Representative of Ecuador in New York, after having served as Ambassador in Geneva. Ms. Espinosa will be the fourth women to hold the position of General Assembly President within the history of the world body and the first since 2006.

She was introduced by the UN Secretary General, Antonio Guterres, as being an experienced diplomat and a politician who’s “direct knowledge of the intergovernmental negotiations on human rights, indigenous women and climate change will help the General Assembly advance the agenda of the United Nations”.

During President Espinosa’s keynote address, she detailed her plans to bring about change to the GA “by bringing the United Nations closer to the people.” This would be accomplished through seven priorities that she indicated would shape this year’s GA73 session. It included the promotion of:

Additionally, she underscored that her priorities during the upcoming session would include the finalization of the Global Compact on Migration, and the implementation of the Addis Ababa Agenda on financing for development. Ms. Espinosa stated that during her presidency she would act as an “impartial, objective, and open facilitator.”

In her concluding remarks, Ms. Espinosa indicated that she would uphold good practices during her tenure at the GA by ensuring geographical representation, gender parity, and total transparency.

Committee chairs for the 73rd session