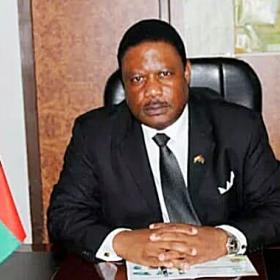 Dr. Perks Ligoya is a macroeconomist, he is a holder of four university degrees which include a doctorate in economic policy management from the Centre d’Etudes et de Recherches sur le Développement Internationa in Clermont Ferrand, France 1998. DR Perks Ligoya begun his career as an economist with the Reserve Bank of Malawi between 1981 and 1999,From 2001 to 2003 Dr.Perks Ligoya was a Senior Economist at the International Monetary Fund (IMF)

He is fluent in both English and French. Ambassador Perks Ligoya has served in various prominent positions in his career, He was Governor of the Reserve Bank of Malawi from September 2009 to April 2012.He served as Senior Economist at the International Monetary Fund. He served as Malawi's High Commissioner to Kenya also accredited to Uganda, Central Africa Republic and Somalia. During this time Dr Perks Ligoya was also serving as the Permanent Representative to the United Nations Environment Programme (UNEP), and also  to to the United Nations Human Settlements Programme (UN-Habitat)

From April 2013 to March 2015 Ambassador Perks Ligoya served as High Commissioner to India and Sri Lanka. As a Consultant he was hired to serve as a Director of Economic Affairs in the Ministry of Finance and Treasury Economic Advisor to the Minister of Finance on a World Bank funded project called Financial Management and Transparency Project (FIMTAP). In 2001 he was a visiting lecturer at Yokohama State University, Japan where he gave summer lectures in macroeconomic modelling. He was one of the founding members and president of the Economics Association of Malawi.