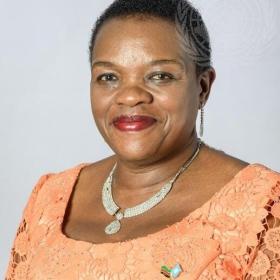 Her Excellency Dr. Agnes Mary Chimbiri-Molande is the Permanent Representative of the Republic of Malawi to the United Nations (U.N.) in New York, United States of America (U.S.A.). She was appointed the Permanent Representative in June 2021 by His Excellency, the President of the Republic of Malawi, Dr. Lazarus McCarthy Chakwera.

Agnes Chimbiri-Molande has about 15 years of experience in the United Nations. Most recently, she served for over six years as Portfolio Manager for Governance for the United Nations Development Programme (UNDP) in Malawi from 2015 to 2021, after serving for eight years as Assistant Resident Representative for Millennium Development Goals (MDGs) Achievement for UNDP in Malawi from 2008 to 2015.

Throughout her tenure with UNDP, Agnes Chimbiri-Molande engaged widely in policy development and implementation, advocacy, and programme management across different governance spheres. She also extensively engaged in legal reforms to promote good governance in Malawi. Under her leadership in UNDP Malawi’s Governance Portfolio, she created three data management platforms, an early warning system on conflict prevention; a monitoring system on sexual and gender-based violence; and a monitoring system on Sustainable Development Goals (SDGs) achievement, helping the UN and Malawi Government to make informed policy decisions in addressing conflicts, violence against women and girls, and poverty.

Agnes Chimbiri-Molande has worked with a number of UN agencies in delivering various development interventions including reforming the UN System in Malawi. While working with the Government, University of Malawi and UNDP, she also worked with the following UN agencies: UNFPA, UNICEF, UNHCR, UNIDO, UNCDF, FAO, UNEP, UNAIDS and UN Women.

Before joining the UN, Agnes Chimbiri-Molande served as Director of the Centre for Reproductive Health of the College of Medicine under University of Malawi between 2003 and 2007, where she provided oversight in social research, policy and programmatic analysis; preparation and presentation of policy papers to Government and other higher learning institutions in Malawi and globally. Her leadership contributed towards making the College of Medicine a global partner and champion on social medicine research and programming.

Previously, Agnes Chimbiri-Molande worked for World Bank as Community and NGO Liaison Officer in Malawi in 1996. She began her career as a civil servant in the Government of Malawi in 1984, working as a Teacher under Ministry of Education until 1985; Personal Assistant to the Secretary to the President and Cabinet from 1986 to 1988, and Head of Research and Planning Unit under Ministry of Information from 1989 to 1995.

She is married and has 3 children.