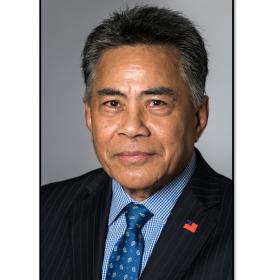 Prior to his current appointment, Fatumanava-o-Upolu III Dr Pa’olelei Luteru was the Ambassador of Samoa to Europe based in Belgium and bilaterally accredited to the Czech Republic, France, Germany, Hungary, Italy, the Netherlands, Spain, Sweden, Switzerland, and the United Kingdom. He was also concurrently Samoa’s Permanent Representative and Delegate to the Food and Agriculture Organisation (FAO), the United Nations Educational, Scientific and Cultural Organisation (UNESCO), the European Commission, and the European Council.

Previously, he was Samoa’s Trade Commissioner to New Zealand from 2010 to 2012. From 2000 to 2005, Ambassador Fatumanava was Assistant Secretary-General of the ACP Group, Political Affairs and Human Development Department in Brussels. Dr Luteru held various positions leading Pacific-EU matters in the design and facilitation of projects for Pacific ACP member states under the Lome IV Convention. He also held several academic positions at the University of the South Pacific including Director of Planning and Development, and from 2005 to 2009 Executive Dean of the Faculty of Islands and Oceans.

Ambassador Fatumanava has chaired several key ACP Committees including the Committee of Ambassadors in 2013-14 and in 2021, Ambassadorial Working Groups, and sub-committees of the Committee of Ambassadors.   More recently, from 2018 to 2021, he was the lead negotiator for the Pacific-EU Protocol under the new post-Cotonou Agreement with the EU and a member of the leads for the Foundation part of the Agreement.  In this capacity, Ambassador Luteru was the lead ACP Negotiator for Part IV, “Means of Cooperation and Implementation” and Part V dealing with “Institutional Framework”.

Ambassador Luteru was involved in consultancy work in key sectors for SIDS development in the Pacific context.  He has also published in several priority areas including “Avoiding the Risk of further LDCs Dependency”, “The practicality of implementing Adult Literacy Programs”, “Aid and Development”, and “A Pioneer Role for both the ACP and EU:  Non-state Actors”.

He holds a Doctor of Philosophy degree (Flinders University, Australia) specializing in Development Economics, Strategic Planning, and Aid Policies, a Masters and post-graduate Diploma from New England University (Australia), and a Bachelor of Science from Canterbury University in New Zealand majoring in Applied Mathematics and Operations Research.