Samoa has taken over the Chairmanship of the Pacific SIDS from Fiji.

At their meeting held on Friday 10 September 2021, the Pacific SIDS Ambassadors formally endorsed the recommendation for Samoa to take over from Fiji, as Chair of the PSIDS Group.  Ambassador Fatumanava III Pa’olelei Luteru thanked and acknowledged the tremendous work accomplished by the outgoing Chair, Ambassador Prasad.   He also commended Fiji’s leadership and stewardship of the PSIDS agenda, and further recognized the hard work and contribution of team Fiji.

Ambassador Luteru further acknowledged the support of his colleagues and the confidence placed in Samoa to serve and lead the Group.   He went on to say that the foundation around which the Group’s Work Plan is to be based will be informed by decisions of Pacific Leaders as well as the UN agenda.   In particular, he reminded that whilst some of the issues will be on-going, others will be of an emerging nature.  For the period October 2021- October 2022, Ambassador Luteru proposed the following key strategic areas to guide future activities of the Pacific SIDS Group: 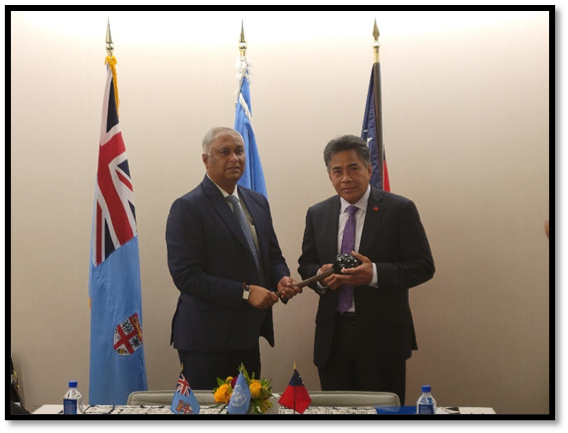 Ambassador Luteru also highlighted the critical importance of working together with development partners to advance the Pacific SIDS agenda in the coming months.  He further invited Ambassadors to be more solution oriented and less problem focus on the challenges that lie ahead.  The Pacific SIDS Group is seen as the logical conduit, to connect and channel views and positions of the Pacific on strategic common issues, to the wider Alliance of Small Island States (AOSIS), the Forum of Small States (FOSS), and other relevant organs within the formal UN structure.

The handling over ceremony was concluded by Ambassador Prasad passing over to Ambassador Luteru the baton signifying the change in the leadership of the Group.