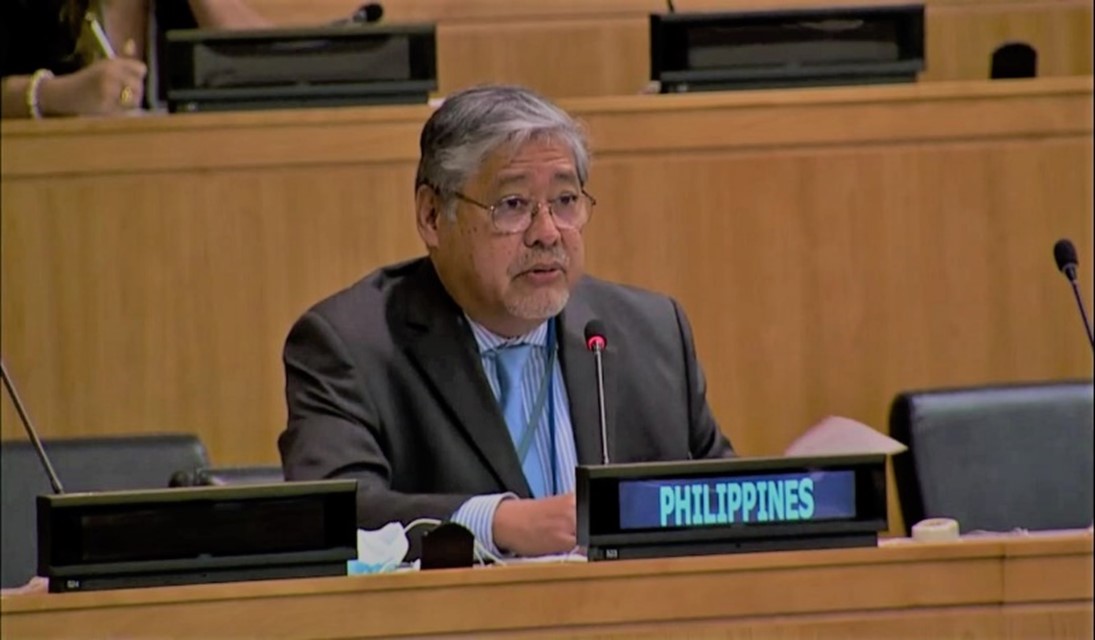 “The Philippines renews its support for the important work of the Fifth Committee, motivated by our shared goal to further enhance the organizational efficiency and effectiveness of the United Nations, even in the face of this human crisis.” – Ambassador Manalo at the opening session of the UN Fifth Committee, 05 October.

05 October 2020, New York City – Philippine Permanent Representative to the United Nations Enrique A. Manalo addressed the United Nations’ Fifth Committee at its in-person opening session held on 5 October 2020, stressing that the Philippines remained committed to the shared goal of further enhancing the organizational efficiency and effectiveness, even in the face of the COVID-19 crisis.

In delivering the Philippine statement, Ambassador Manalo assured the Committee Chair of the Philippines’ constructive participation in the work ahead.

“We will continue to be inspired and motivated by our shared goal to further enhance the organizational efficiency and effectiveness of the United Nations, even in the face of this human crisis,” he said.

Ambassador Manalo commended the Fifth Committee for its efforts to put in place provisional working arrangements for the current session under extraordinary circumstances. While citing that the UN and its Member States are commemorating the 75th anniversary of the UN at such a historic time, he welcomed the organization’s noble efforts to help those countries as well as the vulnerable populations mostly affected by the pandemic and assist them in planning for recovery.

Ambassador Manalo said that the Philippines recognized the need for a hybrid mode of work, utilizing a mix of virtual and in-person meetings, in order for the Committee to sufficiently tackle the work before it, especially the priority issues such as Programme Planning and the Proposed Programme Budget for 2021. Along these lines, he underscored the need for sufficient cybersecurity measures.

“In light of the increased use of virtual meetings or videoconferences and other technological tools during the pandemic, the Philippine delegation agrees that sufficient cybersecurity measures in the United Nations should be put in place to protect the conduct and integrity of our work,” Ambassador Manalo said.

Commenting on the substantive issues, Ambassador Manalo underscored the importance of discussions on the progress in the implementation of the UN’s management reform.

“While the Secretary General’s initiatives on management reform have gained momentum, our delegation acknowledges that more work is needed to fully realize their potential. We reiterate our support to the SG’s commitment of transparency and accountability to this Assembly, to achieve the needed reforms for the organization,” Ambassador Manalo said.

Ambassador Manalo also mentioned other pertinent issues of significant importance to the Philippines, such the financial situation of the United Nations, as well as the funding and backstopping of Special Political Missions and how the implementation and realization of these UN mandates were severely affected by the pandemic.

The Fifth Committee began its session with significant changes to its method of work aimed at safeguarding the health and safety of UN delegates and staff amid the continuing threat of COVID-19.  The extraordinary measures include limiting the number of in-person meetings, restricting the number of persons inside the UN headquarters to a fourth of the normal number, and using the virtual platform for informal consultations and other meetings.

The Fifth Committee deals with Member State contributions to the regular and peacekeeping budgets of the UN, how Member State contributions are allocated, the UN’s programme and peacekeeping budgets and human resources issues. It also is responsible for administrative matters, such as management reform, governance, oversight and accountability issues. Finally, it is responsible for examining all draft resolutions with budget implications before they can head to the Plenary.

Click here for Ambassador Manalo’s statement, and visit this link to view the video.- END.