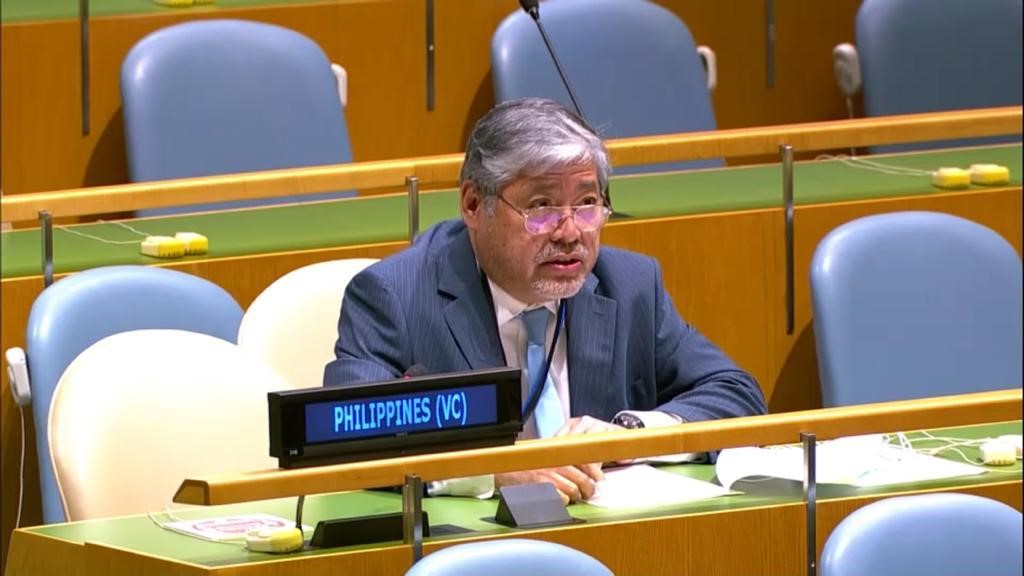 “The Philippines encourages the resumption of constructive steps and positive engagement among concerned Member States to address issues on arms control and nuclear disarmament, particularly bilateral ones.” – Ambassador Manalo at the General Debate of the UN First Committee, 09 October.

09 October 2020, New York City – Speaking at the General Debate of the First Committee of the United Nations, Ambassador Enrique A. Manalo, Permanent Representative of the Philippines to the United Nations, stressed that the COVID-19 pandemic should prompt Member States to redouble efforts and continue pursuing forward-looking, action-oriented outcomes to fully implement the obligations in the Nuclear Non-Proliferation Treaty (NPT). He also emphasized the critical importance of building trust and confidence in all areas of disarmament.

“The global health crisis is setting back our efforts in disarmament and nonproliferation. It has further complicated the prevailing global security environment, which is characterized by increasing polarization and intensifying conflicts,” said Ambassador Manalo.

The Philippines currently serves as Vice President of the Committee representing the Asia-Pacific Group.

In his statement, Ambassador Manalo quoted President Rodrigo R. Duterte who stated in his first address at the United Nations that “no aspiration nor ambition can justify the use of weapons that destroy indiscriminately and completely… These weapons of death put us all at mortal risk, especially if they fall in the hands of terrorists.”  Ambassador Manalo added that as member of the Executive Council of the Organization for the Prohibition of Chemical Weapons (OPCW), the Philippines is very much involved in the work of the OPCW, and noted that international cooperation for the elimination of chemical weapons stockpiles and their non-proliferation remains an urgent concern.

As the Philippines attaches importance to peaceful uses of nuclear energy, Ambassador Manalo commended the IAEA (International Atomic Energy Agency) for its invaluable role in accelerating and enlarging the contribution of atomic energy to peace, health and prosperity. IAEA’s Technical Cooperation Programme is the Agency’s main delivery vehicle for the transfer to developing countries of nuclear technology for  peaceful uses.

Ambassador Manalo also stated that the Philippines supports the implementation of strong regulations for conventional weapons, and spoke about the leadership role of the Philippines. The Philippines is the President-designate of the 22nd Annual Conference of High Contracting Parties of the Second Amended Protocol to the Convention on Certain Conventional Weapons (CCW). In the CCW, Ambassador Manalo said there is a need to address the threat posed by improvised explosive devices (IEDs), particularly by armed non-state actors.

On outer space, Ambassador Manalo called on space-faring nations to respect applicable laws and norms on the use of weapons in outer space and develop appropriate and effective instruments that will prevent an arms race in outer space.

On cyberspace, Ambassador Manalo highlighted that international cooperation must be strengthened to ensure that States have common understanding of international law and norms and how they are applied to cyberspace.

The First Committee held its organization work on 6 October 2020. It is mandated to discuss disarmament, global challenges and threats to peace that affect the international community and seeks out solutions to the challenges in the international security regime. At the opening of the General Debate, Ambassador Agustín Santos Maraver (Spain), Chair of the First Committee, said, “Our task is not going to be easy,” and that “prudence seems to require orienting our discussions to consolidate the body of existing resolutions, but we also have to nurture hope in these times of grief…towards the objective that has been mandated to us of ‘general and complete disarmament under effective international control’.” Mr. Volkan Bozkir, President of the General Assembly, stressed that “Full implementation of the 2030 Agenda for Sustainable Development will require us to make progress on peace and security matters,” underlining the importance of the Committee’s work. For her part, Ms. Isumi Nakamitsu, Under‑Secretary‑General and High Representative for Disarmament Affairs, noted that it is during times of turbulence that the stabilizing forces of arms control and disarmament are needed most.