UNDP adopts Country Programme for the Philippines for 2019-2023 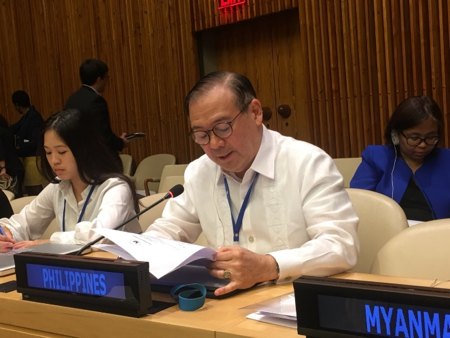 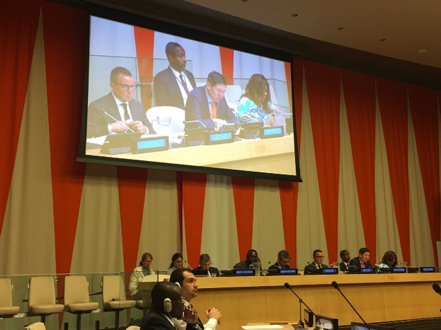 H.E. Mr. Teodoro L. Locsin Jr., Philippine Permanent Representative to the United Nations, conveys support to UNDP’s work in the country during the adoption of the UNDP Country Programme Document for the Philippines for 2019-2023.

07 September 2018, New York – The Executive Board of the United Nations Development Programme (UNDP) adopted today the UNDP Country Programme Document (CPD) for the Philippines for 2019-2023 during the UNDP Segment of its Second Regular Session held on 7 September 2018 at the ECOSOC Chamber, UN Headquarters, New York.

H.E. Mr. Teodoro L. Locsin Jr., Permanent Representative, underlined the country’s long history of development cooperation with UNDP, and expressed strong support for UNDP’s work in the Philippines. Ambassador Locsin welcomed the CPD, which is tightly aligned with the mid- and long-term development goals of the country, as detailed in the Philippine Development Plan 2017-2022 and Ambisyon Natin 2040.

The CPD is anchored in the 2030 Agenda for Sustainable Development. It supports the strengthening of democratic institutions and government effectiveness, mainstreams climate change adaptation and disaster mitigation, and assists the Philippine government in finding solutions to long-standing problems.

Ambassador Locsin, in his statement, said that “I use “government” advisedly rather than governance, the now fashionable term for the vast responsibility that still devolves on the state which has our taxes and therefore the preponderance of resources to deliver on the reason government exists—at great expense and much waste we note.”

“I will use “governance” when calling for the added enlistment of civil society so the public can pitch in in a sober and organized fashion. Thus the CPD highlights support to improve delivery of basic services and to strengthen existing platforms by wider public engagement,” he said.

Ambassador Locsin also underlined the need to ensure a smooth transition to avoid disrupting programs in the repositioning of the UN Development System. He urged UNDP to ensure adequate and predictable core and non-core funding to help programme countries, such as the Philippines, implement the 2030 Agenda.

Mr. Haoliang Xu, UNDP Regional Director for Asia and the Pacific, presented the UNDP CPD for the Philippines. He stressed that the CPD is a result of consultations with the Philippine government, donors, CSOs and other relevant stakeholders and reflects the UNDP’s offer in Strategic Plan 2018-2021. END