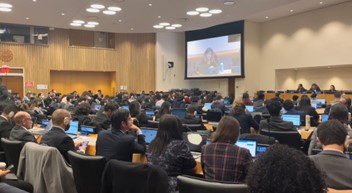 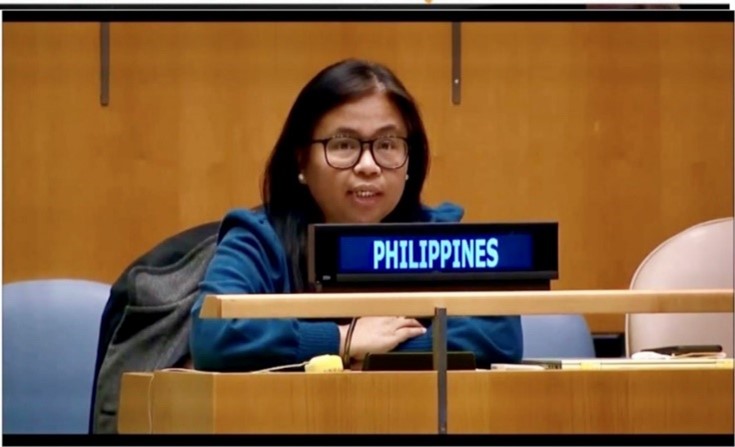 United Nations Headquarters, 21 November 2021: The United Nations lauds the instrumental role of the Philippines, in the person of Minister Leila C. Lora-Santos (right photo), in facilitating the intergovernmental negotiations on the resolution on “International Migration and Development” to its successful outcome (Photo credit: New York PM)

UNITED NATIONS, NEW YORK, 21 November 2022 — The Second Committee of the United Nations General Assembly adopted by consensus the resolution on International Migration and Development, and lauded the Philippines for its leadership in the intergovernmental process. The adoption marked a historic feat as, for the first time in five years, the resolution was not voted on, which delivered a strong political message in support of migrants all over the world.

Many delegates particularly recognized and appreciated as instrumental the role of the facilitator of the intergovernmental negotiations on the resolution, Minister Leila C. Lora-Santos of the Permanent Mission of the Philippines to the United Nations in New York, in the successful outcome.

The resolution recognizes, among others, the positive contributions of migrants in inclusive growth and sustainable development in countries of origin, transit and destination, including by enriching societies through human, socioeconomic and cultural capacities, It recognizes the role that migration plays to increase social, cultural and economic ties between nations. It also recognizes the positive contribution of young migrants to the sustainable development of countries of origin and destination, and encourages States to consider the specific circumstances and needs of young migrants,

While expressing deep concern on the severe and disproportionate impact of the pandemic on migrants, the resolution recalls the positive role and contributions of millions of migrants in responding to and recovering from the COVID-19 pandemic.

The resolution also elaborates on the importance of remittances as instrument to improve the well-being of recipients and the potential of remittances to reduce poverty, increase access to education, health and improved housing, promote financial inclusion and increase the inflow of foreign currency, as well as ensure food supplies in rural areas. It recalls, with appreciation, that many countries declared remittances to be essential services and eased regulations during the COVID-19 pandemic.

Further, the resolution recognizes the importance of investing in human capital development by promoting entrepreneurship, education, vocational training and skills development programs and partnerships, productive employment creation, in line with labor market needs, with a view to reducing youth unemployment, avoiding brain drain and optimizing brain gain in countries of origin, and harnessing the demographic dividend.

The resolution underlines that international migration is a multidimensional reality and a cross-cutting phenomenon of major relevance for the development of countries of origin, transit and destination, which requires coherent and comprehensive responses and balanced approaches. It acknowledges the complexity of migratory flows and the importance of strengthening joint analysis and sharing of information to better map, understand, predict and address migration movements.

The resolution reaffirms the importance of facilitating orderly, safe, regular and responsible migration and mobility of people, including through the implementation of planned and well-managed migration policies; as well as States’ commitments as contained in the International Migration review Forum Progress Declaration (IMRF PD).

It also encourages Member States to integrate migration as a cross-cutting issue in national development plans, development cooperation and other relevant frameworks, and to expand international cooperation and partnerships to implement the vision of the Global Compact for Safe, Orderly and Regular Migration (GCM), including through financial and technical assistance to developing countries, especially to African countries, the least developed countries, landlocked developing countries, small island developing States and middle-income countries.