Secretary Locsin at the UN: anticipatory action is key to disaster risk reduction and management 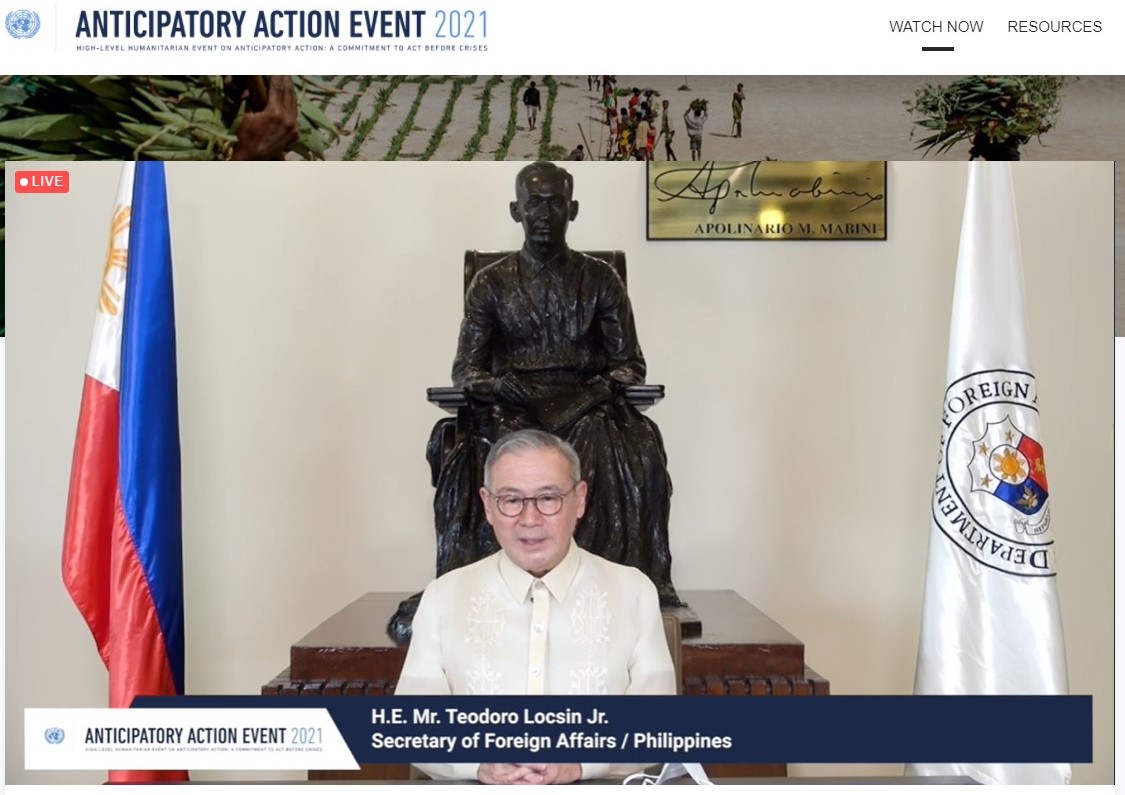 UNITED NATIONS, NEW YORK, 09 September 2021 — Foreign Secretary Teodoro L. Locsin, Jr. renewed the commitment of the Philippines to anticipatory action at a high-level humanitarian event entitled Anticipatory Action: A Commitment to Act Before Crises. Anticipatory action is a set of actions taken to prevent or mitigate potential disaster impacts before a shock or before acute impacts are felt. It is carried out in anticipation of a shock, based on a prediction of how the event will unfold.

“We’ve gained the wisdom that predicting, preventing and mitigating the shock and impact of a disaster are key to risk reduction and management,” Secretary Locsin said.

The Secretary stated that the Philippine Development Plan (PDP) and National Disaster Risk Reduction and Management Plan (NDRRMP) worked because of the collective effort of Filipinos, government and public.

Secretary Locsin highlighted some of PDP and NDRRMP features such as data sharing, creation of command systems and emergency operation centers at national and local levels. He also shared the information that the Philippines developed the app HunterHazard to provide land developers risk information and assessment of a particular area and the establishment of the Philippine Space Agency to strengthen hazard monitoring and forecasting through earth observation through satellite sensing. He also noted that since 2015, the Philippines has worked with the Philippine Red Cross, the UN World Food Programme, the Food and Agriculture Organization, and other stakeholders to build capacity.

“The climate crisis has increased the severity and frequency of storms.  Even for a country like the Philippines, it can be overwhelming,” Secretary Locsin said.

The Secretary also added that the Philippines is an active supporter of the UN Central Emergency Fund (CERF) and looks look forward to working as a pilot country with CERF in its project on anticipatory action to typhoons.

In his opening remarks, UN Secretary General António Guterres said, “Anticipatory action saves lives, livelihoods, homes and entire communities.” Secretary General Guterres called on governments and donors to increase support for preparedness anticipatory action and the rapid emergency response at all levels via pooled funds like CERF, the International Federation of Red Cross and Red Crescent Societies (IFRC), Disaster Relief Emergency Fund and the START Fund. He also announced that a complex risk analytics fund will be launched to help scale up investment for data analytics and early warning systems.

Mr. Volkan Bozkir, President of the 75th session of the UN General Assembly noted that the Assembly adopted resolution 75/127 to encourage Member States and the humanitarian system to develop or strengthen anticipatory mechanisms. The membership affirmed that fast, and flexible financing for preparedness, early action, early response and early recovery is the best path forward.

“By releasing resources against a pre-agreed protocol based on credible predictions and forecasts of disasters, we can protect those in the most precarious situations,” President Bozkir said.

The Anticipatory Event 2021 was convened by the United Nations and the Governments of Germany and the United Kingdom to advance anticipatory action and galvanize a collective push to act ahead of crises. This event also builds on recent G7 commitments on anticipatory action and ahead of the 2021 UN Climate Change Conference, recognizing the growing impact of climate change on the severity and frequency of crises. END.