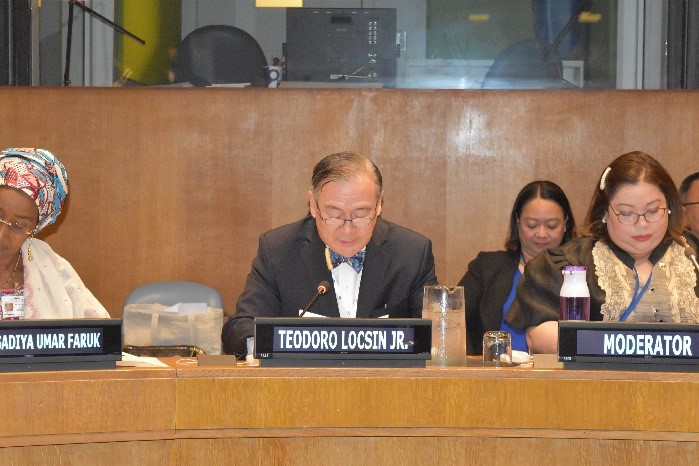 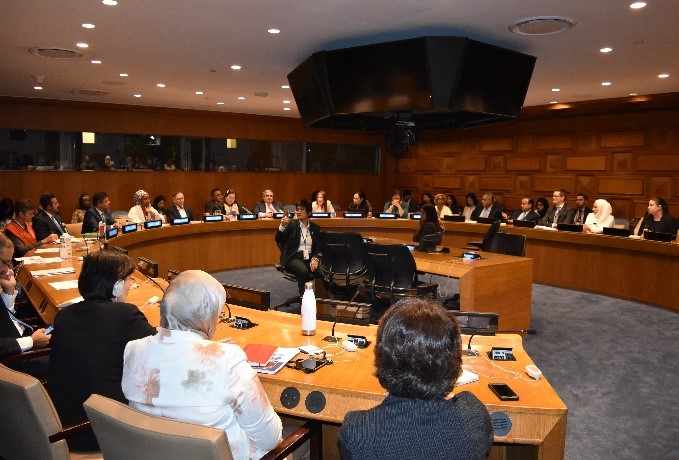 27 September 2019, New York – The Philippines, together with Bahrain and Nigeria, organized the high-level event entitled “Combatting Trafficking in Migration Contexts: Best Practices, Challenges and the Global Compact for Migration” held on 27 September 2019 at the sidelines of the 74th session of the United Nations General Assembly.

Foreign Affairs Secretary Teodoro L. Locsin, Jr. delivered the opening statement, where he highlighted PH’s whole-of-society approach: “We started by getting all agencies involved in the fight – foreign affairs, justice, social welfare, the military, the police, education, immigration, the Central Bank, and the local governments.”

Special Envoy of the Philippine President to UNICEF Monica Prieto-Teodoro reinforced the call to action, stating that “we are all here because we are determined to eradicate child trafficking.”

Undersecretary of Justice Emmeline Aglipay Villar emphasized PH’s commitment to international solidarity in combatting child trafficking: “The Philippines stands ready, and stands with you all, in the fight against trafficking. Against a transnational scourge such as human trafficking, we will succeed together – or not at all.”

After the statements of the ministers, the following panelists spoke: Mr. Ausamah Abdullah Al-Absi, Chairman of the National Committee to Combat Trafficking in Persons and Chief Executive Officer of the Labour Market Regulatory Authority (Bahrain); Ms. Hajara Ahmed, Head of Planning, Research and Statistics of the Ministry Humanitarian Affairs, Displacement Management and Social Development of Nigeria; Ms. Simone Monasebian, Representative of the United Nations Office on Drugs and Crime (UNODC), New York; Ms. Jill Helke, Director of the Department of International Cooperation and Partnerships, International Organization for Migration; H.E. Peter Szijjártó, the Foreign Minister of Hungary; H.E. Lord Ahmad of Wimbledon, Minister of State for the Commonwealth, the UN and South Asia of the United Kingdom. END