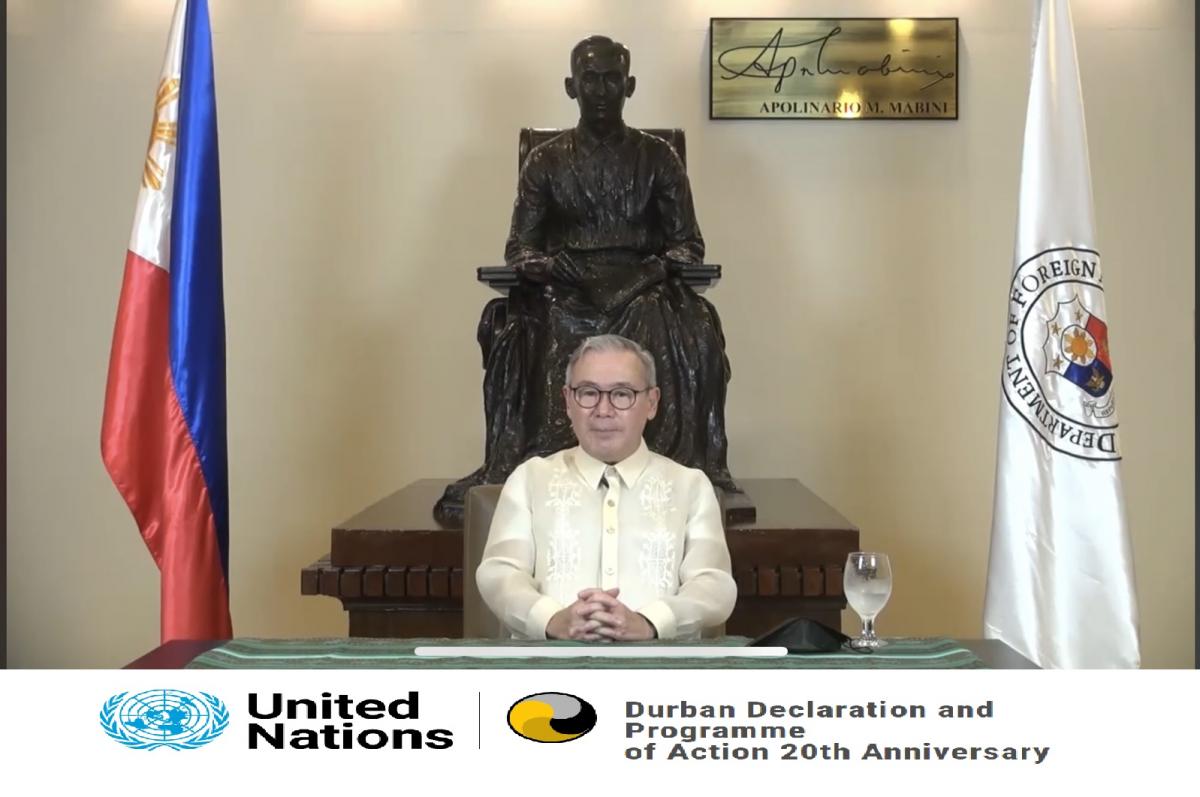 Department of Foreign Affairs Secretary Teodoro L Locsin, Jr. during the High-Level Meeting to Commemorate the the 20th Anniversary of the Adoption of the Durban Declaration and Programme of Action

Secretary Locsin said that the issues the Declaration sought to address, particularly racism, racial discrimination, xenophobia and related intolerance, still exist today and have been aggravated by the pandemic. He added that the DPPA condemned these acts toward migrants, along with the degrading stereotypes applied to them. “The Declaration’s call upon Member States to eradicate all forms of intolerance faced by Asians and people of Asian descent is still relevant 20 years hence,” the Secretary added.

Secretary Locsin highlighted that “through awareness raising and education, justice and accountability, policy interventions, and other tools outlined in the Declaration, we are all called to treat our fellow human beings with the respect and dignity we feel is owed to ourselves as such. This meeting’s Political Declaration gives renewed impetus to do just that, and hold on to our claim of humanity.”

In his opening remarks, UN Secretary General António Guterres said that the DDPA was meant to break the vicious cycle, in which discrimination leads to deprivation, and poverty deepens discrimination. He called on Member States to take concrete actions, including through policy measures, legislation and more granular data collection, in support of all the efforts at the national and global level.

Mr. Abdulla Shahid, President of the 76th session of the UN General Assembly noted that the DDPA was adopted to address racial discrimination and intolerance. “We as a global community have not done enough to tackle the pervasiveness of racism, racial intolerance, and xenophobia. Tackling racism in all its forms is a moral responsibility for justice,” Mr. Shahid said.

The UN General Assembly decided in its resolution 75/237 to hold a one-day high-level meeting to commemorate the 20th anniversary of the adoption of the DDPA on the theme “Reparations, racial justice and equality for people of African descent”. The DDPA was adopted during the World Conference against Racism, Racial Discrimination, Xenophobia and Related Intolerance held in Durban, South Africa, from 31 August to 08 September 2001. The Declaration embodies the commitments of the international community to address the legacy of the past as well as contemporary forms and manifestations of racism and racial discrimination, including the acknowledgement that slavery and slave trade are a crime against humanity. The Programme of Action constitutes a comprehensive road-map recommending how Member States and other stakeholders should implement these commitments. END.