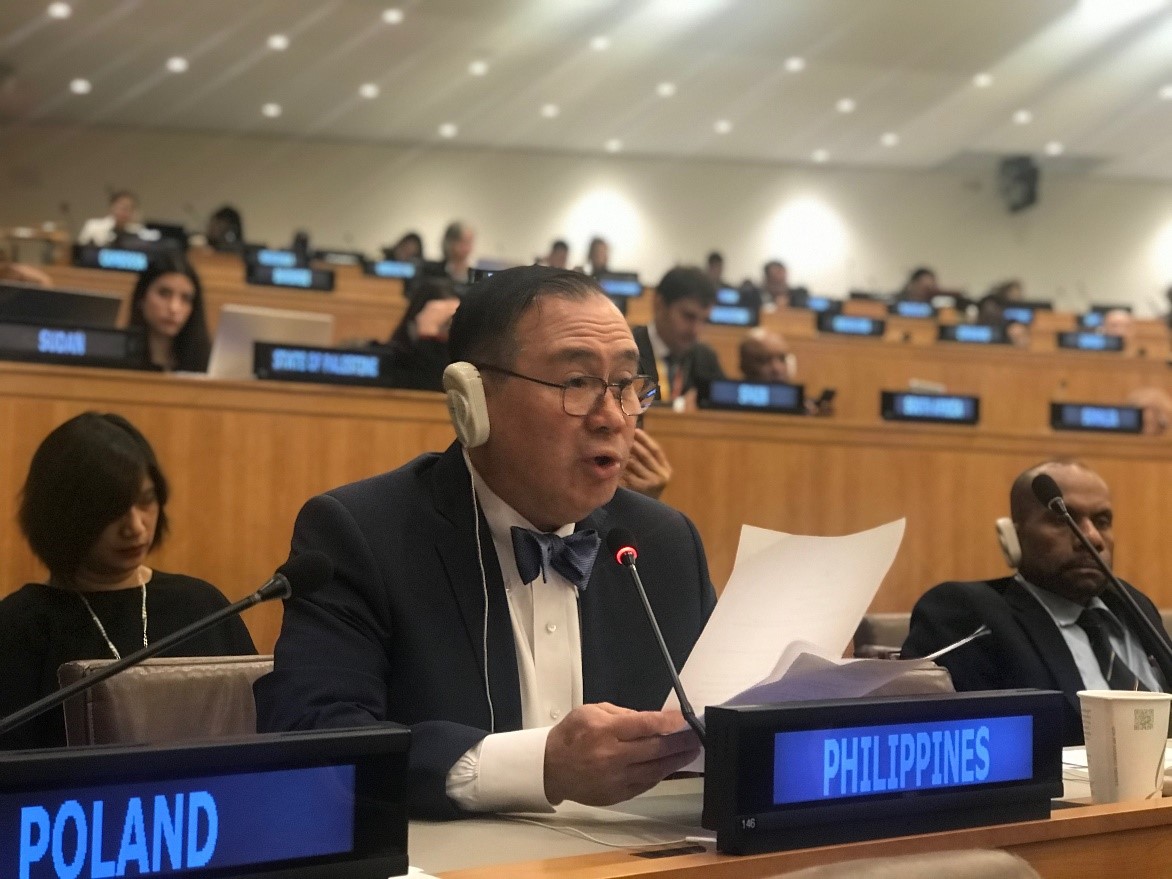 17 June 2019, New York City – Secretary Teodoro L. Locsin, Jr. today called on United Nations members to enforce their duty under the United Nations Convention on the Law of the Sea (UNCLOS) to render assistance to persons in distress at sea.

Speaking at the commemoration of the 25th Anniversary of the entry into force of UNCLOS at United Nations Headquarters in New York, Secretary Locsin stressed that the “duty to render assistance” is found in UNCLOS and in the International Maritime Organization’s (IMO) International Convention for the Safety of Life at Sea, as amended, and the IMO Convention on Maritime Search and Rescue.

“It is the obligation of every member state of the UN and of the IMO to pay, not just lip service to these conventions but to observe them in real life-and-death situations. The rescue of persons in distress is a universally recognized obligation of people and governments; and in the civil law and, maybe even in common law, it is a felony to abandon people in distress; especially when we cause that distress; and more so when it is no bother at all to save them at no risk to oneself. While no sanction is available in international law, it should be a cause of some concern.”

The Secretary was referring to the sinking by a Chinese vessel of a Philippine fishing vessel anchored in Recto Bank in Palawan, in the West Philippine Sea on 9 June 2019. The 22 Filipino crew were left in the water until a Vietnamese vessel took them on board. The Secretary also thanked Viet Nam for “this act of mercy and decency.”

The commemoration of the 25th Anniversary of the entry into force of UNCLOS is taking place at the 29th Meeting of the States Parties to the UNCLOS (SPLOS). The annual meeting considers developments related to UNCLOS and its subsidiary bodies.

The Philippines was one of the original signatories of UNCLOS in 1982, and it ratified it in 1984.

In his statement, Secretary Locsin said that the Philippines has “strongly supported and upheld UNCLOS because it provides a comprehensive legal regime for the oceans and the seas. As the ‘constitution of the oceans,’ it affirms the rule of law in maritime space. Rule of law must be adhered to by all States Parties in the belief that no one can thrive nor survive for long in anarchy. Whether international law can be enforced is another matter. And it doesn’t help that parties with the strength to enforce it — and who have invoked a lot the need for it — have not joined it.”  As such, he added that the Philippines “on the basis of UNCLOS … filed a carefully crafted and successful complaint at The Hague to clarify the legal situation in the South China Sea; to remove the confusion or the pretext of confusion on the part of those violating it.”

The following is the link to the full Remarks of Secretary Locsin: https://www.un.int/philippines/statements_speeches/29th-meeting-states-parties-un-convention-law-sea-agenda-item-8-commemoration