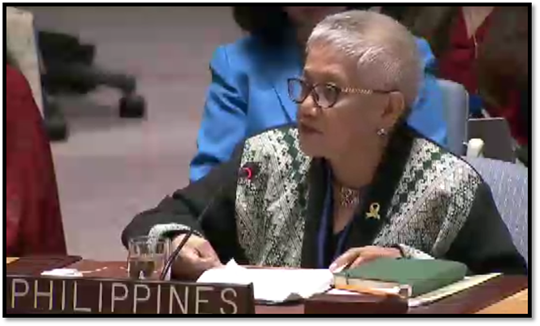 Presidential Adviser on the Peace Process, Secretary Teresita Quintos-Deles, said time has come for all governments to make sure that women are given a greater role in preventing armed conflict or, once it has broken out, in resolving it and ensuring its enduring and inclusive peace dividends.

NEW YORK CITY, 13 October 2015 – The key role played by Filipino women in coming up with a peace agreement in the Southern Philippines was highlighted today at the United Nations Security Council.

Presidential Adviser on the Peace Process, Secretary Teresita Quintos-Deles, led the Philippine delegation to the High Level Review of UN Security Council Resolution 1325 on Women, Peace and Security which celebrates 15 years of implementation this year.

“History has not been remiss in reminding us about the scars and wounds of war deeply etched in humanity’s soul, with its trail of blood always leading to a grieving woman’s doorstep and a weeping child’s nightmare. Indeed, the time has come for all governments to make sure that women are given a greater role in preventing armed conflict or, once it has broken out, in resolving it and ensuring its enduring and inclusive peace dividends,” Secretary Deles said in her statement.

Secretary Deles said the agreement is historic not only because it signaled the end of a long-standing war in Southern Philippines but also because it is the first agreement of its kind in the world to bear the signature of a total of three women, which accounts for one-half of the negotiating panel of the Government and about one-fourth of the total number of its signatories.

“It is the first such agreement to bear the signature of a woman as Chief Negotiator – Professor Miriam Coronel-Ferrer. In addition, 69 percent of the Secretariat of the government Panel, including its head, and 60 percent of the legal team, including its head, are women, under the ages of 35 and 30, respectively,” she stressed. UN Member States applauded the Secretary’s statement twice.

Secretary Deles also highlighted the Philippine National Action Plan (NAP) on Women, Peace and Security as the first to be adopted in Asia. It contains the national policy pursuant to UN Security Council Resolutions 1325 and 1820.

Initiated by civil society advocates, the Philippine NAP rests on four pillars, consisting of two targeted outputs – briefly identified as (1) Protection and Prevention, and (2) Empowerment and Participation; and two cross-cutting support processes – namely, Promotion and Mainstreaming and Monitoring and Evaluation.

“The story of the Philippine NAP may best be told through the metaphor of weaving – more specifically, mat-weaving which is common to Asian countries. Just as weaving is not learned overnight but goes back to generations, the Philippine NAP benefits from decades of consciousness-raising and organizing of women, peace and human rights advocates. The Philippine NAP thus collapses time,” the Secretary said.

The Philippine NAP is anchored and provided legal basis by Philippine law, led by the Magna Carta of Women and recent national legislation adopting human rights and international humanitarian standards. There is also a law that requires all government agencies and local government units to allocate at least five percent of their budgets as a dedicated gender and development fund, thus ensuring available funds for immediate start-up and mobilization needs.

Secretary Deles said modest initial results are now being reported with the implementation of the NAP.

These include the strengthened presence of women in peace negotiations and the implementation of peace accords; the establishment of “women-friendly spaces” to ensure the needed measure of private and safe space for internally displaced women and girls in evacuation centers; the adoption of explicit gender equality policies and mechanisms as an integral part of the governance of the Armed Forces of the Philippines; culture-sensitive trauma healing programs for Muslim women; the inclusion of WPS issues in the training of our foreign service officers; the plan to establish a dedicated team of public prosecutors for cases of sexual and gender-based violence in conflict afflicted areas.

“The past five years have enabled us to weave a meticulous overlay of legal frameworks, implementing structures, institutional mandates, and, of course, always of personal passions and inclusive and inter-generational intentions. We must ensure that the NAP we have begun to weave will endure the forthcoming transition to a new administration in 2016,” she said. END