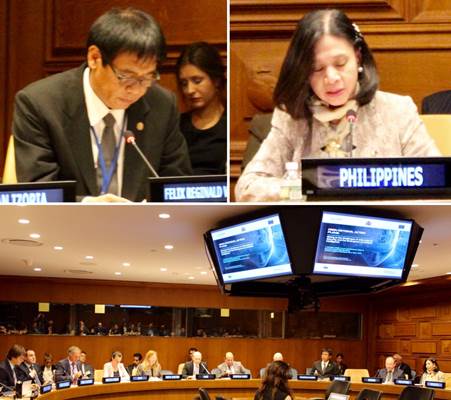 NEW YORK, 07 October 2015 – The Philippines joined Morocco and Georgia in creating a UN Group of Friends (GoF) of CBRN Risk Mitigation and Security Governance that will promote CBRN related topics in the United Nations.

Philippine Permanent Representative to the UN, Ambassador Lourdes O. Yparraguirre, read the joint statement establishing the GoF at a side event on “Chemical, biological, radiological and nuclear (CBRN) National Action Plans: Rising to the Challenges of International Security and the Emergence of Artificial Intelligence” last 07 October. The event was organized by Georgia in cooperation with the United Nations Interregional Crime and Justice Research Institute.

“The establishment of the GoF builds on the three countries’ respective experiences in enhancing their own CBRN capabilities, as well as their cooperation and partnership with the European Union CBRN Centres of Excellence Risk Mitigation Initiative,” Ambassador Yparraguirre said.

The Philippines hosts the Centre of Excellence in Southeast Asia.

The GoF will serve to address and promote various CBRN related topics in the UN, including in the Security Council, by actively engaging with Member States and the UN Secretariat.

It will also help integrate the CBRN component in the international security architecture, sensitize states on the importance of mitigating CBRN risks, and foster regional cooperation on CBRN challenges.

The GoF intends to promote activities aimed at building capacity and develop capabilities between and among partner States and relevant state stakeholders, and promote best practices.

It will draw all stakeholders' attention to the importance of bringing onboard relevant international, regional and sub-regional organizations, and promote the implementation of UN Security Council Resolution 1540 and subsequent relevant resolutions.

Meanwhile, Undersecretary Felix Reginald Villasanta, Executive Director of the Presidential Anti-Organized Crime Commission, served as one of the keynote speakers in the side event where he highlighted the Philippines’ implementation of its CBRN National Action Plan (NAP).

Undersecretary Villasanta reported that the Philippine Congress has passed the “Strategic Trade Management Act” which will prevent the proliferation of weapons of mass destruction, including the spread of CBRN materials/weapons, by managing the trade in strategic goods. The bill is now awaiting the President’s signature.

“Once the bill becomes law, a single entity will be created to deal with CBRN threats,” he said, adding that the Philippines’ NAP will be revisited if needed to incorporate new ideas in light of recent advances and threats posed by new technologies. END