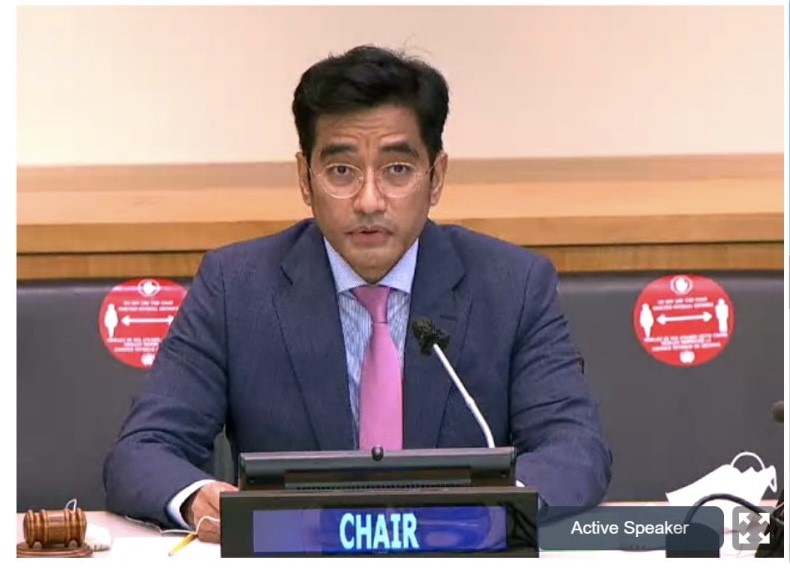 Deputy Permanent Representative Ariel Rodelas Peñaranda, in his capacity as Vice Chair for the Asia-Pacific Group, sits in as Chair of the Sixth Meeting of the Seventh Biennial Meeting on the Programme of Action on Small Arms and Lights Weapons (BMS7).

UNITED NATIONS, NEW YORK, 30 July 2021 – The Philippines, represented by Deputy Permanent Representative Ariel Rodelas Peñaranda of the Philippine Mission to the United Nations, was elected one of the Vice Chairs of the Bureau of the Seventh Biennial Meeting of States (BMS7) on the Programme of Action on Small Arms and Light Weapons, which took place from 26 to 30 July 2021. Biennial meetings of the Programme of Action have the mandate to consider the national, regional, and global implementation of the Programme of Action to prevent, combat, and eradicate the illicit trade in small arms and light weapons in all its aspects and its International Tracing Instrument (ITI). As Vice Chair, the Philippines represented the Asia-Pacific regional group of Member States.

At the week-long meeting conducted in a hybrid format, Special Envoy on Transnational Crime, Ambassador Bruce Concepcion of the Philippine delegation, emphasized Philippine recognition of the illicit trade in small arms and light weapons as a major impediment to peace and security as well as to achieving the Sustainable Development Goals (SDGs), particularly Goal 16 (peace for sustainable development).

“The Plan of Action gives the international community another tool for reducing human suffering, criminality, and violence caused by easy access to illicit small arms and light weapons,” Ambassador Concepcion said in his virtual intervention delivered from Manila.

In one of the in-person sessions, and speaking in his national capacity, DPR Peñaranda highlighted the Philippine priority of “addressing the diversion of small arms and light weapons that may eventually end up in the hands of terrorists and criminals.” Diversion and the illicit international transfer of small arms and light weapons to unauthorized recipients, such as terrorists and criminals, is a global challenge, requiring concerted efforts at the national, regional and global levels.

Another Philippine delegate, First Committee Expert Diane Lipana, noted that “the Philippines recognizes the importance of international cooperation and assistance for building capabilities.” She, however, pointed out that “the principles of sovereignty and non-interference should be given utmost consideration,” and “assistance should be freely agreed upon among parties involved.”

In his remarks, Mr. Thomas Markram, Director and Deputy to the High Representative for Disarmament Affairs, warned that “[A]s small arms and light weapons continue to play a central role in initiating, exacerbating, and sustaining armed conflict, pervasive violence and instability, the sense of urgency for effective and forward-looking control measures remains as potent as ever.”

The BMS7 was chaired by Ambassador Martin Kimani, Permanent Representative of Kenya to the United Nations, who shepherded the crafting by Member States of an outcome document that highlighted 2021 marking the 20th anniversary since the adoption of the Programme of Action. The outcome document this year recognized the important contribution the instrument has made to the dialogue and concerted actions of States to prevent, combat, and eradicate the illicit trade in small arms and light weapons in all its aspects. In the Programme of Action, governments agreed to improve national small arms regulations, strengthen stockpile management, ensure that weapons are properly and reliably marked, improve cooperation in weapons tracing, and engage in regional and international cooperation and assistance. END