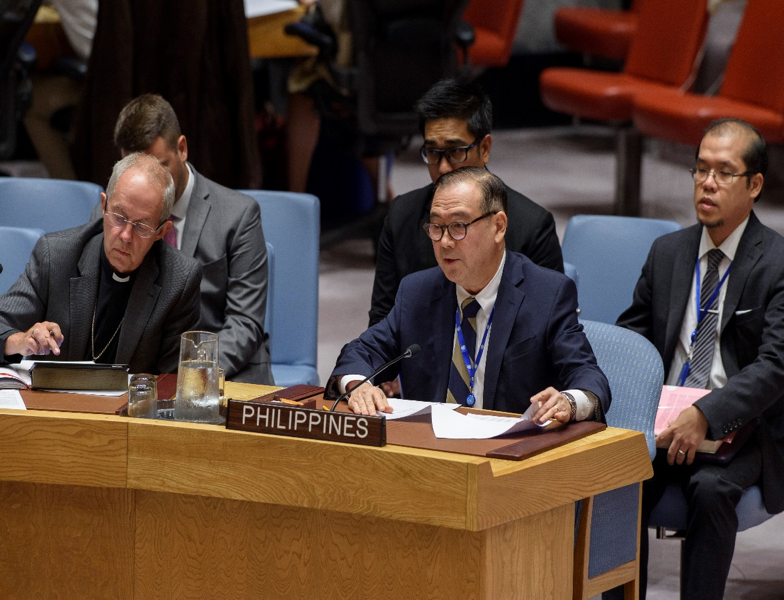 Ambassador Teodoro L. Locsin, Jr., Philippine Permanent Representative to the United Nations, delivers the Philippine Statement during the UN Security Council’s Open Debate on “Mediation and the Settlement of Disputes” held at the Security Council Chamber, UNHQ on 29 August 2018.

Philippine Permanent Representative to the United Nations Ambassador Teodoro L. Locsin, Jr. reaffirmed the Philippines’ commitment on mediation during the UN Security Council’s Open Debate on “Mediation and the Settlement of Disputes” convened by the Permanent Mission of United Kingdom of Great Britain and Northern Ireland in its capacity as President of the Security Council for the month of August. The Debate was chaired by Lord Tariq Mahmood Ahmad of Wimbledon, UK’s Minister of State for the Commonwealth and the United Nations.

In his statement before the Security Council, Ambassador Locsin stressed that the Manila Declaration for the Peaceful Settlement of International Disputes “is eponymous with the Philippine desire for peace and, emphatically, its abhorrence of settlement by the use or threat of force.”  He said that “when used in key phases of conflict,” as the Philippine experience demonstrates, “mediation is a game-changer, especially in indecisive conflicts.”

“After 18 years of sustained engagement in a peace process, the Philippine Government has enacted the Bangsamoro Organic Law creating the Bangsamoro Autonomous Region. Signed by President Rodrigo Roa Duterte, it recognizes the aspirations of those living in Muslim Mindanao – not just Muslim but Christian and indigenous – within the framework of one indivisible democratic republic and one Bill of Rights,” the Ambassador explained.

Ambassador Locsin also conveyed the recent announcement of the Presidential Adviser on the Peace Process on the Philippine Government’s negotiations with the Communist Party of the Philippines: “the doors for peace negotiations with the communist rebels are still open.” He thanked Norway for its hospitality and perseverance, and expressed hope for the country’s continued engagement in the peace process.

The Philippines continues to co-sponsor the General Assembly resolution promoting mediation and more funding for it, and has contributed mediation experts on constitution-writing, power-sharing, and gender equality.

The aim of the Open Debate was to provide Member States with the opportunity to consider the UN’s role in both leading and supporting inclusive mediation efforts, how it can be strengthened, and how the Security Council and Member States can best support these efforts.

The Security Council last considered mediation and the peaceful resolution of conflicts in an Open Debate on 21 April 2009. The UN has taken a number of steps to strengthen its mediation capabilities, including the establishment of the Mediation Support Unit in 2007 and the Standby Team of Senior Mediation Advisers in 2008.

The 2017 Secretary-General’s Report on UN Activities in Support of Mediation highlights the growing complexity and internationalization of conflicts, the acceleration in the speed and spread of information, and the increasing fragility of peace agreements.

Before the Debate, UN Secretary-General António Guterres said that “successful mediation and the peaceful settlement of disputes requires a deep understanding of leaders and their constituencies – and strong political will.”  He urged Member States to continue and strengthen efforts to move beyond negotiations with political and military elites. “That means working at the subnational and local levels to help build peace from the ground up. Local authorities, civil society, traditional and religious leaders all have critical roles to play,” the Secretary-General added.

Over 70 Member and Observer States delivered their respective interventions during the Open Debate. END