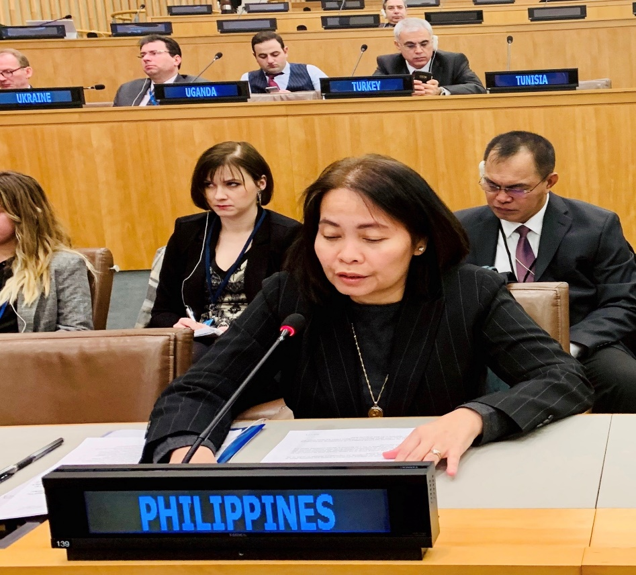 UNIO Assistant Secretary Noralyn Jubaira-Baja delivers the Philippine statement at the General Debate of the 2020 C-34 Substantive Session.  AFP MGEN Andres C. Centino, Deputy Chief of Staff for Operations (J-3), is part of the Philippine delegation to the session.

18 February 2020, New York – Assistant Secretary Noralyn Jubaira-Baja of the Department of Foreign Affairs Office of the United Nations and other International Organizations (UNIO) reaffirmed to the United Nations today the Philippines’ commitment to deploy more women peacekeepers to UN peacekeeping missions at all levels and in leadership positions.

Speaking at the opening of the 2020 Special Committee on UN Peacekeeping Operations (C-34) Substantive Session, Assistant Secretary Baja said the commitment was in line with the UN and the Philippines’ women, peace and security agenda.

“We remain committed to increasing the participation of women in uniformed roles, and support the call to integrate gender perspectives in all aspects of peacekeeping.  The deployment of more women peacekeepers is a key component in generating specialized, high-performing capabilities for UN peacekeeping,” Assistant Secretary Baja said.

Assistant Secretary Baja also outlined the three (3) other priority themes of the Philippines under the Action for Peacekeeping (A4P) Declaration of Shared Commitments on UN Peacekeeping Operations, a new framework for this year’s substantive negotiations chaired by Canada.  She expressed Philippine support to the need for tailored, context-specific peacekeeping approaches to protecting civilians, particularly women and children; providing adequate pre-deployment preparations and in-Mission training of personnel; and for the zero-tolerance policy and victim-centered approach on all forms of sexual exploitation and abuse.

“The Philippines also supports calls for a strengthened role for the Working Group on Peacekeeping Operations under the purview of the UN Security Council,“ Assistant Secretary Baja stressed.

A subsidiary body of the General Assembly, the C-34 is comprised of 154 Member States (all troop-and police-contributing countries or T/PCCs).  Scheduled from 17 February to 13 March 2020, the session will cover four (4) more thematic elements, namely politics, partnerships, peacebuilding and sustaining peace and safety and security.

Since 1963, the Philippines has actively engaged in 21 UN peace operations (peacekeeping and special political missions) in Asia, Africa, the Middle East and South America.  The Philippines ranks #87 out of 118 T/PCCs as of 31 December 2019. END