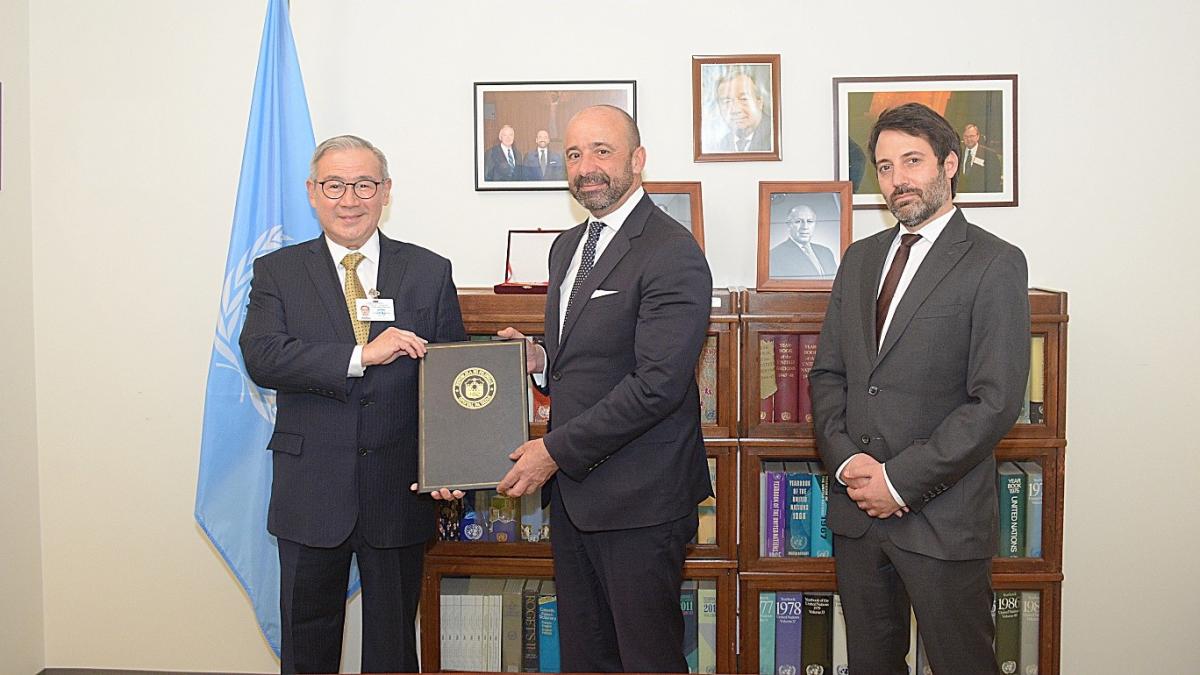 Secretary of Foreign Affairs Teodoro L. Locsin Jr. deposits the instrument of ratification of the Arms Trade Treaty and the instrument of accession to the 1961 Convention on the Reduction of Statelessness at the United Nations. The deposit ceremony is graced by UN Legal Counsel and Under-Secretary-General Miguel de Serpa Soares and the Chief of Treaties, David Nanopoulos. (Photo Credit: UNOLA)

UNITED NATIONS, NEW YORK, 24 March 2022 - Secretary of Foreign Affairs Teodoro L. Locsin Jr. deposited the instrument of ratification for the Arms Trade Treaty and the instrument of accession to the 1961 Convention on the Reduction of Statelessness today in a ceremony at the United Nations. Under-Secretary-General for Legal Affairs Miguel de Serpa Soares received the instruments on behalf of the Secretary General of the United Nations, who is the depositary of the said multilateral agreements. USG de Serpa Soares was accompanied by Chief of Treaties David Nanopoulos,

Both treaties will enter into force on 22 June 2022 for the Philippines.

The Arms Trade Treaty (ATT) is an international treaty that regulates the international trade in conventional arms and seeks to prevent and eradicate illicit trade and diversion of conventional arms by establishing international standards governing arms transfers. It entered into force in 2014 and presently has 110 states parties. The Philippines signed the ATT in 2013 during a UN Treaty Event organized by the Treaty Section of UN-OLA.

“Joining this treaty is in line with our commitment to ensure international and regional peace, security, and stability through the regulation of the illicit transfer, flow or diversion of conventional arms using internationally agreed standards,” Secretary Locsin added.

Meanwhile, accession to the 1961 Convention on the Reduction on Statelessness is an important step in the Philippines’ national strategy to end statelessness.

The 1961 Convention establishes a system of common rules that elaborates clear, detailed, and concrete safeguards to ensure a fair and appropriate response to the threat of statelessness. It ensures measures to promote acquisition or retention of nationality to persons who would otherwise be rendered stateless and who have an appropriate link with the states. It would enable the Philippines to address gaps due to differences in the citizenship and nationality frameworks without impinging on the Philippines’ sovereignty to regulate nationality.