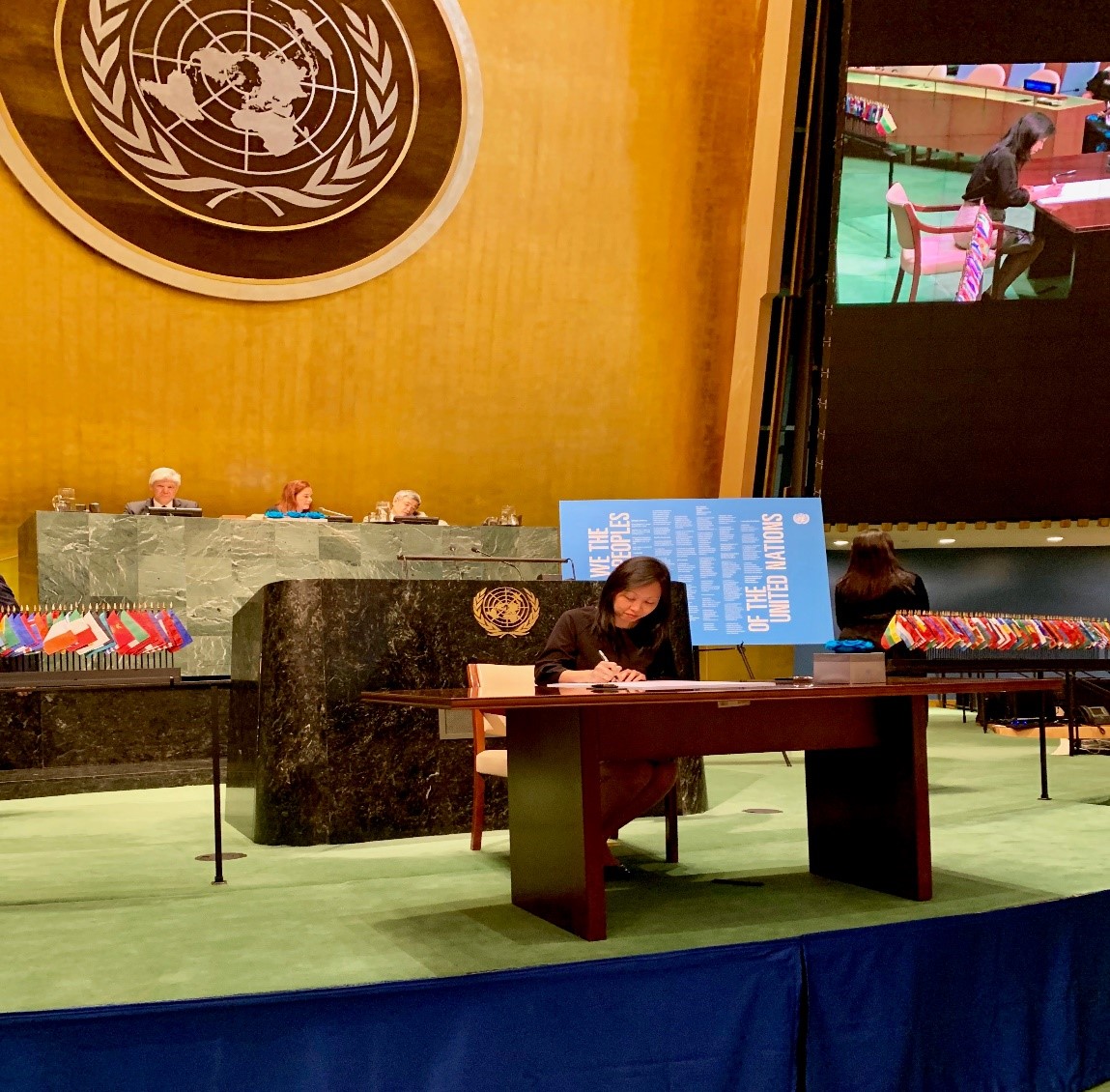 NYPM Chargé d’ Affaires a.i. and Deputy Permanent Representative Ms. Kira D. Azucena signs a poster of the Preamble of the Charter of the United Nations in a symbolic ceremony to launch activities for the 75th anniversary of the Organization in 2020, held at the GA Hall on 26 June 2019.

26 June 2019, New York City – The Philippine Mission to the United Nations, represented by Chargé d’Affaires, a.i., and Deputy Permanent Representative Ms. Kira Christianne D. Azucena, participated in the symbolic signing of the Preamble of the Charter of the United Nations to launch activities for the 75th anniversary of the Organization in September 2020.

“With successes, continuing challenges and unceasing criticism, the UN has not only demonstrated its resilience, but also affirmed its continuing relevance against the backdrop of complex global issues and emerging regional threats to peace and security. It remains the essential Organization,” CDA Azucena said.

“If the UN is to endure, it must remember that it is a collection of sovereignties but not itself a sovereign collective. It is only as effective as members cooperate to make it so,” CDA Azucena added.

In her Opening Statement, Mrs. Espinosa Garcés, President of the 73rd Session of the General Assembly, in turn, said that “this event is intended as a small contribution to rekindling the spirit of 26 of June 1945.  She explained that “This art work, featuring the Charter’s Preamble in the UN’s six official languages, will remain on display until the commemoration of the 75th anniversary next year. It highlights the opening words of the UN Charter, ‘We the peoples’, as a reminder that we are here to serve humanity.”

Mr. Fabrizio Hochschild Drummond, the Secretary-General’s Special Adviser on the preparations for the Commemoration of the Seventy-Fifth Anniversary of the United Nations, stressed that the event served “as an expression of our renewed commitment to the United Nations Charter, ahead of the 75th Anniversary of the Organization in September 2020.” He confirmed that a formal concept note on the anniversary event and program of activities will be issued soon for consideration of Member States and Observers.

“The 75th anniversary of the United Nations is an opportunity for us Member States to impress upon a skeptical world the truly central role of the UN in forging peace, preserving our environment, and assuring posterity of its dignity, security and prosperity, CDA Azucena concluded.

The Philippines was one of the 50 founding Member States which signed the Charter of the United Nations on 26 June 1945 at the San Francisco Conference. END