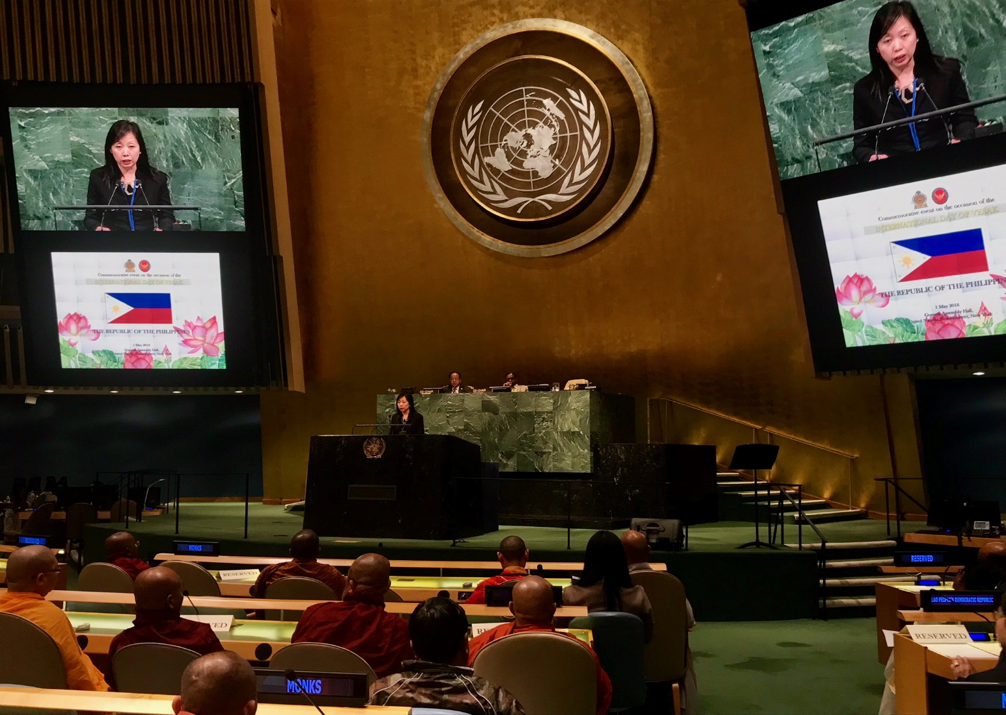 NYPM Chargé d’ Affaires a.i. and Deputy Permanent Representative Ms. Kira D. Azucena addresses the United Nations General Assembly during the commemorative ceremony of the 2018 International Day of Vesak held at the GA Hall on 01 May 2018.

01 May 2018, New York City – The Philippine Mission to the United Nations, represented by Chargé d’Affaires, a.i., and Deputy Permanent Representative Ms. Kira Christianne D. Azucena, participated in the 2018 International Day of Vesak to commemorate the birth, enlightenment and passing away of Buddha, held at the General Assembly Hall.

Attended by the Venerable monks and nuns from at least 22 Member States, the annual General Assembly commemorative event was hosted by the Permanent Missions of Thailand and Sri Lanka.

“It is imperative that all Member and Observer States continue to work for, invest in and sustain peace,” DPR Azucena said. She echoed the UN Secretary-General’s view that “Sustaining peace is a shared task and responsibility of government and all other national stakeholders…”

Introduced in the Philippines between the 7th and 13th centuries, the Buddhist faith is practiced today by some 2% or 2 million of the country’s population. The Philippines ranks 20th in the world in terms of Buddhist population.

In 2000, Member States adopted UN Resolution 54/115 of 1999 recognizing this important event. The Philippine Government issued Proclamation No. 24, declaring the full moon day of May of every year as Vesak Day, consistent with its national policy of fostering interfaith dialogue to promote peace, security and development,

“As we continue to build peace inside us and around us, may the teachings of Buddha continue to transform our world into one of compassion, cooperation and constancy; a world with balance, healing and benign purpose,” DPR Azucena concluded.