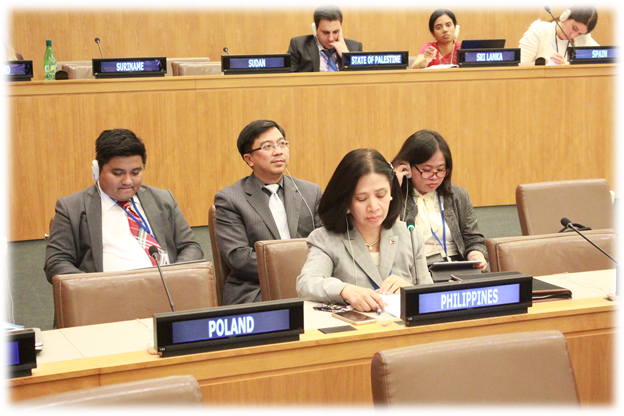 “Arbitration is a pacific and rules-based way of settling disputes,” Philippine Ambassador Lourdes O. Yparraguirre
shares with States Parties to the United Nations Convention on the Law of the Sea.

NEW YORK, 12 June 2015 – The Philippines today stressed before the United Nations that China’s expansionist policy claiming almost all of the South China Sea should concern the international community as a whole.

Speaking at the annual meeting of States Parties to the UN Convention on the Law of the Sea (UNCLOS), which counts 167 countries including the Philippines and China, Ambassador Lourdes Yparraguirre, the country’s Permanent Representative to the UN, noted the growing concern on the implementation of UNCLOS because of China’s increasingly aggressive rhetoric and action in the South China Sea.

“This threatens the integrity of the Convention, our constitution for the oceans,” according to Ambassador Yparraguirre,

UNCLOS, which was adopted in 1982 and entered into force in 1994, defines the rights and responsibilities of its States Parties with respect to their use of the world's oceans, establishing guidelines for businesses, the environment, and the management of marine natural resources.

The Ambassador recalled China’s recent actions that continue to infringe on the exercise and enjoyment by the Philippines of its sovereignty and sovereign rights to its own exclusive economic zone. This began in 2012 when China reneged on a mutual agreement to withdraw naval presence from Scarborough (Panatag) Shoal, which is only 124 nautical miles west of Luzon, Philippines, and about 800 nautical miles southeast of China’s nearest coast. Since then, China has been in possession of the shoal, erecting a barrier to its entrance to prevent the access of Filipino fishermen to their traditional fishing grounds.

The Ambassador also scored China for violating not only UNCLOS, but also the 2002 ASEAN-China Declaration on the Conduct of Parties in the South China Sea, the Convention on Biological Diversity, and the Convention on International Trade in Endangered Species of Wild Fauna and Flora or CITES, for its accelerated large scale ocean filling, or “reclamation” in several disputed features in the Spratlys, including Johnson Reef, McKennan Reef, Mischief Reef, Cuarteron Reef, Gaven Reef and Fiery Cross Reef. The last one alone expanded to 11 times its original area.

“To undertake this … ocean filling or reclamation, [China] … has had to dredge out and pulverize entire systems of coral reefs that took many centuries to grow, reducing them into landfill, and thus devastating the already fragile marine ecosystem and biodiversity of the region by irreparably destroying the habitat of depleted, threatened or endangered species and other forms of marine life,” according to Ambassador Yparraguirre.

The Ambassador cited data from marine scientific experts that China’s destruction of the coral reef systems in the South China Sea and their transformation into over 800 hectares of landfill has resulted in an estimated economic loss of US$281 million annually. However, the resulting tragedy to the environment is “incalculable”, according to Ambassador Yparraguirre.

“There should be no attempt to assert territorial or maritime claims through intimidation, coercion or force, including through unilateral and aggressive action such as massive, large scale land reclamation. There should be no pattern of forcing a change in the status quo in order to advance a so-called nine-dash line claim of undisputed sovereignty over nearly the entire South China Sea,” Ambassador Yparraguirre emphasized.

The Ambassador also highlighted the dispute settlement mechanism under UNCLOS, and explained that China’s massive ocean filling activities are meant to change the status quo ahead of a ruling by the arbitral tribunal constituted to hear the Philippines’ case impugning China’s so-called nine-dash line.

“If there is doubt and uncertainty on the limits of our adjacent maritime spaces affecting several States Parties in the region, and if bilateral consultations and negotiations have proven futile and one-sided because of lack of good faith, then the solution is the dispute settlement mechanism provided by UNCLOS and the UN Charter … Arbitration under UNCLOS is a pacific and rules-based mode of settling disputes,” said Ambassador Yparraguirre. END.