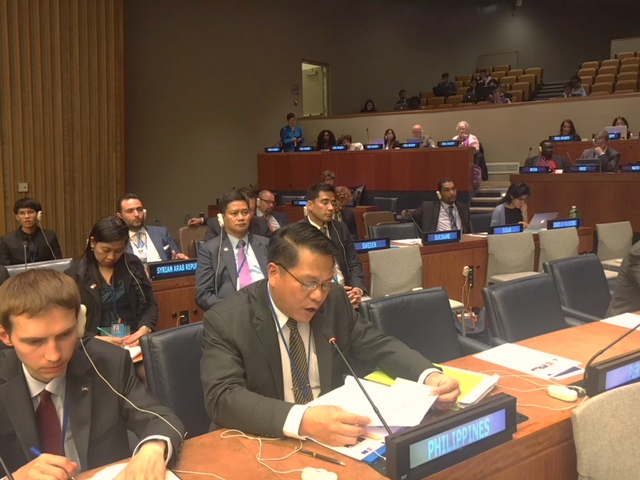 Special Envoy on Transnational Crime Mr. Bruce Concepcion highlights the importance of international cooperation and capacity building assistance while respecting national sovereignty in fighting the illicit trade of small arms and light weapons in the Philippine statetment at the Third Review Conference of the Programme of Action last June 18 in New York

New York, 18 June 2018 – The Philippines recognizes the importance of international cooperation and assistance for building capabilities in fighting the illegal trade of small arms and light weapons (SALW), but these cannot be attached to political conditions and subjected to foreign second-guessing on what security operations Member States choose to conduct.

This was highlighted by Special Envoy on Transnational Crime Mr. Bruce Concepcion in the Philippine statement delivered at the Third United Nations Conference to Review Progress Made in the Implementation of the Programme of Action to Prevent, Combat and Eradicate the Illicit Trade in Small Arms and Light Weapons in All Its Aspects (UN PoA on SALW).

“It is our exclusive sovereign prerogative to address the roots (of illegal weapons of foreign origin), or to fight the flower of conflict and criminality,” Special Envoy Concepcion said in the statement.

Special Envoy Concepcion also cited as the Philippines’ top priority addressing the diversion of small arms and light weapons that eventually end up in terrorist hands.  He also shared progress in the government’s efforts to achieve its overall goal to register all firearms in the country through a one-stop shop and putting it online.

Special Envoy Concepcion further said that the Philippines has completed the draft of the Philippine National Action Plan on Small Arms and Light Weapons. The draft features a whole-of-government approach to enhance capabilities to combat the illicit trade in small arms and light weapons.

According to Police Chief Superintendent de Leon, the Philippine Government is rolling out a nationwide firearms amnesty program to increase the documentation of firearms. Of the 1.7 million registered firearms, 489 thousand were registered and renewed; the rest expired because of the stringency of the laws.  To register more firearms and remove fixers, the PNP has now confined registration online and without punitive features.

To assist national efforts, the Philippines seeks the fullest cooperation with international partners such as through its commitment under the UN PoA. Among the priority areas of action include securing technical assistance, strengthening of end use/r systems to prevent arms diversion, and enhancing capabilities in marking, recording and tracing. END