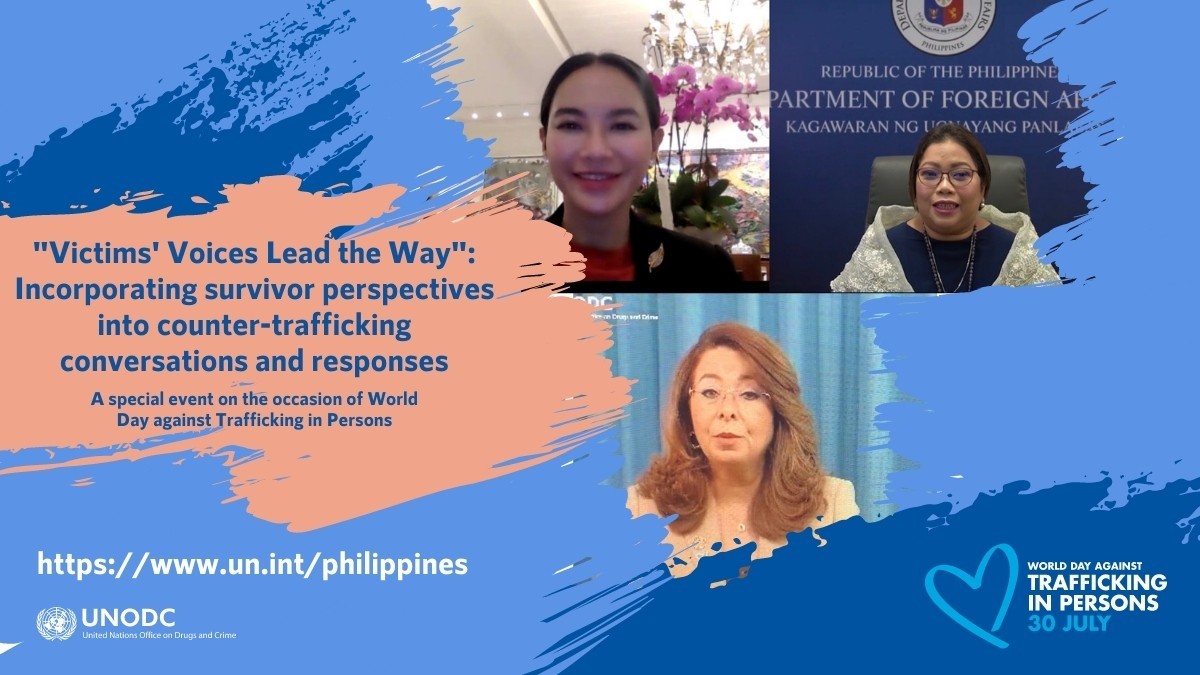 UNITED NATIONS, NEW YORK, 30 July 2021 — The Philippines promoted empowerment of trafficking survivors at the special event on the occasion of the World Day against Trafficking in Persons titled “Victims’ Voices Lead the Way: incorporating survivor perspectives into counter-trafficking conversations and responses,” organized by the United Nations Office on Drugs and Crime (UNODC) and the Permanent Mission of the Republic of Belarus on behalf of the Group of Friends United against Human Trafficking.

Department of Justice Undersecretary Emmeline Aglipay-Villar highlighted in her opening remarks the goal of any anti-trafficking response, which is to ensure that victim-survivors are not only given ample protection but also provided with services that will facilitate their recovery and full integration to society. She noted that the Philippines focuses on the empowerment of survivors through sectoral engagement which are largely undertaken through the various civil society organizations that serves to bridge the gap between government and its constituents.

“Survivors are not passive actors of the process,” she said, adding that “we need to continuously advocate for their empowerment through meaningful engagements that will not just provide stopgap solutions, but rather, those that will significantly uplift their lives for the better.”

At the same event, Undersecretary for Migrant Workers Affairs Sarah Lou Arriola of the Department of Foreign Affairs highlighted how the Philippines fought for the inclusion of decent work and fair and ethical recruitment provisions in the Global Compact for Safe, Orderly, and Regular Migration. She also stressed that the Philippines has taken to heart the implementation of the 4Ps approach of prevention, protection, prosecution, and partnership.

“The Philippines believes that the best way to protect those vulnerable to trafficking is to be proactive and to prevent their victimization. This is why the Philippines has been relentless in forging partnerships with Middle East countries such as Bahrain and Saudi Arabia in support of their groundbreaking efforts to reform their respective labor systems,” Undersecretary Arriola stated.

The opening segment of the event also featured a statement from Ms. Ghada Waly, Executive Director of the UNODC who urged everyone to listen to every story of victims of trafficking in persons.

“Inspired and guided by the resilience of those who survived, we can build the resilience of our societies to trafficking in persons, help prevent and alleviate suffering, end impunity, and achieve justice,” Ms. Waly said.

The second segment of the event incorporated survivor voices into counter-trafficking conversations and responses. It featured statements from survivors, advocates and different civil organizations.

The special event provided a venue to recommit to working together to advance efforts to address trafficking in persons, with victims’ voices leading the way. It provided an opportunity to listen to, and learn from, survivors of trafficking in persons, as well as those civil society organizations and service providers working directly with victims. END