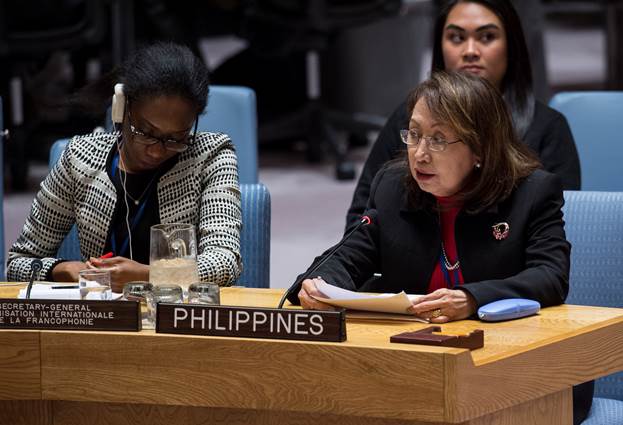 New York, 27 October 2017 - Women played an important role in the Philippine government’s response to the Marawi crisis in the implementation of rehabilitation and recovery programs and in providing psychosocial support for the trauma healing of the displaced women and children.

In the Philippine statement delivered at the Security Council Open Debate on Women, Peace and Security last October 27, OPAPP Undersecretary Diosita Andot cited the deployment of a composite all-female Civil Relations Company (CRC), composed of 55 enlisted personnel from the Army and 40 non-commissioned police officers, to Marawi in August to assist the survivors of the siege in evacuation centers and communities and significantly need humanitarian and recovery support.  Women-led civil society organizations and local agencies have also channeled their resources in assisting women and children displaced by the conflict, providing psychosocial support for the trauma healing of the displaced women and children by way of trainings on community organizing for livelihood generation and actively engaging them in women peace conversations.

These activities illustrate the women, peace and security agenda in action in the Philippines.

“The (Philippine) National Action Plan on Women, Peace and Security serves as the blueprint of the government and civil society efforts towards protecting women, preventing violation of their rights, and empowering them so that they play a decisive role in conflict prevention, conflict resolution, and peacebuilding,” the Undersecretary said. – END-

OF THE OFFICE OF THE PRESIDENTIAL ADVISER ON THE PEACE PROCESS

DURING THE ANNUAL DEBATE ON WOMEN, PEACE, AND SECURITY

Members of the Security Council,

To start, allow me to inform this august body that Marawi City, in the southern part of the Philippines has just been liberated from terrorist forces inspired and ordered by the Islamic State terror network, after being captive for the past five months.

However, the liberation is no cause for celebration. Marawi City was destroyed by the fighting and 700,000 persons more than 50% of which are women and children have been displaced by the conflict. There have been casualties on both sides, and from the civilian population.  The estimated damage and losses due to the conflict are still being assessed but conservative estimates peg it at around 1 to 2 billion US Dollars. Cognizant to this, President Rodrigo Roa Duterte declared that the reconstruction and rehabilitation of Marawi City is a government priority.   In fact, as early as June, the President had issued Administrative Order 3, creating the Task Force Bangon Marawi (TFBM), an inter-agency mechanism which spearheads the recovery, reconstruction and rehabilitation of Marawi City and affected localitites.

I am happy to share that our agency, the Office of the Presidential Adviser on the Peace Process which also serves as the Focal Point on WPS, sits as one of the members of the said task force. We are in the process of coming up with a comprehensive rehabilitation plan informed by rigorous Post-Conflict Needs Assessment (PCNA) and Recovery & Peacebuilding Assessment (RPBA)  through the help of various stakeholders ranging  from community members, national and international partners such as the United Nations Development Programme and World Bank to name a few.

Throughout this process, the government has been keen in observing Conflict-Sensitive and Peace -Promoting approaches with particular focus on mainstreaming gender and observing cultural sensitivities in its various interventions.

For almost two decades of government interventions to implement UN Security Council Resolution 1325, and related resolutions, the Philippines is proudest about the three National Action Plans on Women, Peace and Security (NAPWPS) it has delivered.  Now on its third cycle for the implementation period 2017-2022, allow me to briefly share the salient features of our new NAPWPS.

At its crafting, the Philippine NAPWPS, incorporating the learnings from the previous cycles’ implementation, adopts a broader framing of addressing the situation of women in armed conflict and recognizing their contributions to conflict transformation. It primarily aims to embed the language and precepts of gender equality, as provided for in the Convention on the Elimination of All Forms of Discrimination Against Women (CEDAW) and, in particular, the CEDAW General Recommendation 30 with regard to ensuring women´s human rights “before, during, and after” various conflict contexts. It also takes into account the context of non-international armed conflicts, like ethnic and communal violence, states of emergency and internal displacement, war against terrorism and organized crime some of which are situations of concern in the Philippines at present as exemplified by the Marawi crisis and continuing pursuit of final political solution to the Bangsamoro conflict in Southern Philippines.

In the pursuit of the peace process with rebel groups, significant actions are continuously taken to ensure the meaningful participation of our women, especially the Moro and indigenous women, and their rights are protected in conflict and post-conflict situations.

The Filipino women have played a crucial role in responding to the Marawi Crisis. For the first time, amidst the fighting, the Armed Forces and the Police formed and deployed a composite all-female Civil Relations Company (CRC) to Marawi on August 29, 2017, to assist in the implementation of rehabilitation and recovery programs for Internally-Displaced Persons (IDPs) in the battle-stricken city. The Company was organized, trained and developed with a mission to build a culture of peace, and to make every child and youth a peace-builder.  The Company is composed of 55 enlisted personnel from the Army, and 40 non-commissioned police officers.  36 of the members are Muslims, with 22 of them from the Maranao tribe.  The Company is led by 4 female officers from the Army.  Their mission is to assist the survivors of the siege who are currently positioned in evacuation centers and communities and significantly need humanitarian and recovery support.

Women-led civil society organizations and local agencies have also channeled their resources in providing psychosocial support for the trauma healing of the displaced women and children. At present, we have been training women in the IDP camps on community organizing for livelihood generation and actively engaging them in women peace conversations.

In a nutshell, the National Action Plan on Women Peace and Security, serves as the blueprint of the government and civil society efforts towards protecting women, preventing violation of their rights, and empowering them so that they play a decisive role in conflict prevention, conflict resolution, and peacebuilding.  The Department of National Defense and allied forces, as well as the National Police forces are part of formulation of the plan and its implementation and are required to monitor, report and evaluate their commitments and role under the plan.These plans will guide the rehabilitation of Marawi.  Our government is committed to protect the rights of the affected population, especially women and children who are particularly vulnerable, including to trafficking in persons.

The implementation of the NAPWPS for the past years, saw women helping other women, and women leading the peace processes, signing and implementing the peace agreements, being deployed as soldiers at the battlefront defending the civilians from terrorism, and working as peacekeepers both here and across borders, and helping women and children victims of the conflict.

Recently, a training kit on Mainstreaming Women, Peace and Security in Development Planning Processes was developed and launched by the Philippines with support from UN Women.  This is an important tool in further localizing the National Action Plan on Women, Peace and Security, and a recognition of the role of the Local Government Units in the partnership towards protecting all women who may be affected by conflicts at the grassroots.

Not only the rehabilitation of Marawi City but peace throughout the land, remains to be a priority of the Philippine government, and enjoys the full-support of the leaders at the highest level of government. Sustainable peace and development are the building blocks of Ambisyon 2040 the long-term Vision of the Philippines.

In all of these, while some Filipino women have become vulnerable victims in  the conflict affected areas, there are also Filipino women who in one way or another continuously get inspired by their fellow Filipinas to be champions for ensuring  the implementation of gender-sensitive and peace promoting policies and programs. Filipino women sit at high echelons of our government including peace panels that are negotiating for, and implementing signed peace agreements. This humble representation sits in 2 government panels for the implementation of the peace agreements with the Moro National Liberation Front and the Moro Islamic Liberation Front, respectively. More than ever, I could say that it is in these times that Filipinos show resilience. As the armed conflict in Marawi is drawing to its end, we know that our journey to its rehabilitation and recovery has just started and there is a long way ahead to re-build not only the extrinsic aspect of the city but more importantly the mending of the torn social fabric of the Maranaw society.  It is in this process that Filipino women in each basic unit of the Maranaw family, as a child, as a sister, as a mother and at times as a father will play a critical role in the rebuilding of relationships in their respective communities and eventually of Marawi as a whole. In turn, the Philippine Government continues to remain committed in preventing violent extremism and ensuring that such crisis will not happen again.

In closing, allow me Madam President to extend our gratitude to the United Nations, its agencies and Member States for their support in the humanitarian response and peace-based rehabilitation initiatives for Marawi.