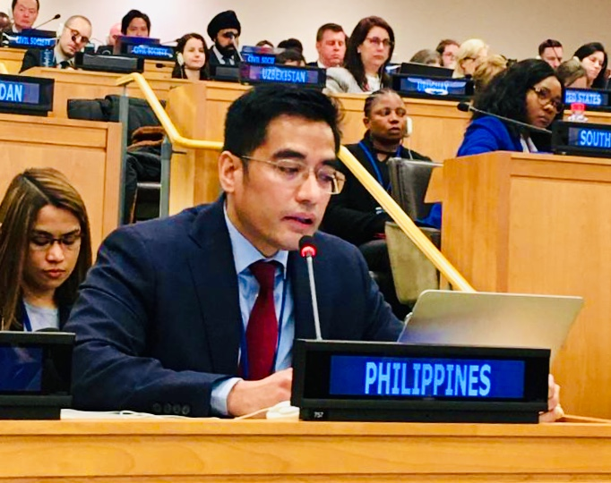 Minister Ariel Rodelas Peñaranda, Philippine Mission to the United Nations in New York, stresses the importance of the protection of critical infrastructure from cyber-attacks and information manipulation.

17 February 2020, New York – The Philippines underscored the importance of the protection of critical infrastructure from cyber-attacks and information manipulation, citing these as very urgent security concerns.

Addressing the open-ended working group on developments in the field of information and telecommunications in the context of international security at their second substantive session in the United Nations headquarters on 10-14 February, Minister Ariel Rodelas Peñaranda said the Philippines is a major hub for social networking, and continues to strengthen its national  cybersecurity infrastructure to thwart such cyber threats.

Minister Peñaranda added that the Philippines has a robust industry that consists of small and medium enterprises, similar to many other countries, and noted that “threats against this group should also be addressed in earnest.”

During the meeting, a segment on rules, norms and principles and international law discussed whether or not there is a need for a binding instrument to govern Member States on the security of information and telecommunications. Philippine Delegate Ericka Abad of the Office of the Undersecretary for Civilian Security and Consular Concerns Concerns and (UCSCC) cited the need to be guided by the requisites of state sovereignty and the imperatives of domestic laws when considering a binding instrument on cybersecurity.

On institutional dialogue, Minister Penaranda also told Member States that the Philippines held a cybersecurity Summit in the Philippines which was participated by industry players and companies from the private sector, and he suggested that this kind of Summit may also be considered by the Chair as a proposed undertaking by Member States.

Switzerland’s Permanent Representative to the UN, H.E. Mr. Jürg Lauber, Chair of the OEWG, encouraged delegations to make use of the substantive sessions to listen to each other, express their national concerns, and bring to the table their national expertise, practice, needs, and requirements on issues of cybersecurity.

Pursuant to Resolution 73/27 of the UN General Assembly entitled "Developments in the field of information and telecommunications in the context of international security," the OEWG held its first substantive session on 9-13 September 2019 and intersessional consultative meeting on 2-4 December 2019 for stakeholders-academics, private industry, and civil society.

The Philippines continues to strengthen its defenses against cyber-attacks. In 2016, government websites were subjected to attacks including attempts at hacking and defacement. The importance for the Philippines of information security is reflected not only in its National CyberSecurity Plan, but also in its National Security Strategy. The programs under the national plan aim to ensure the protection of critical infrastructure, the government itself, businesses and supply chains, as well as individuals. The national strategy, on the other hand, laid down the government’s strategic actions on cybersecurity. Specifically, the Department of Information and Communications Technology (DICT) is implementing the government’s CyberSecurity Plan 2022, which aims to ensure protection, resiliency, and public awareness. The Philippines also has in place the requisite laws to address issues on information security. END