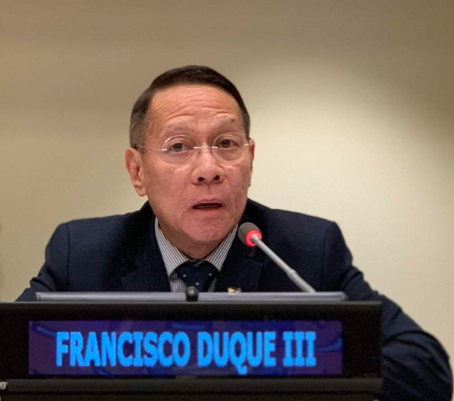 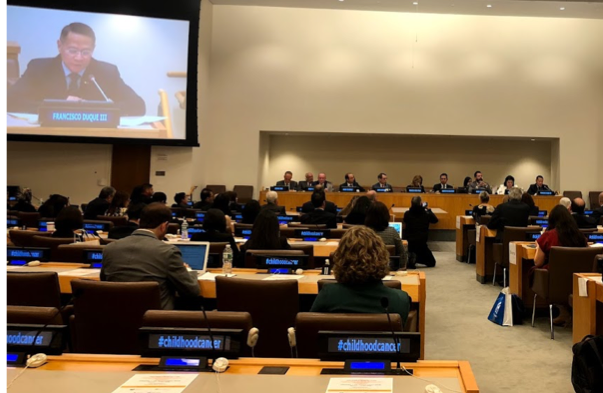 Health Secretary Francisco T. Duque III outlines the Philippine priorities and programs on the early detection and management of childhood cancer in a Philippine co-sponsored event at the sidelines of the Third United Nations High-Level Meeting on the prevention and control of non-communicable diseases on 28 September 2018.

28 September 2018, New York – Health Secretary Francisco T. Duque III expressed the Philippines’ commitment and strong support for the detection, treatment, and cure of pediatric cancer during an inaugural meeting on childhood cancer at the United Nations on 28 September 2018.

“Every year, approximately 4,000 Filipino children are expected to be diagnosed with cancer but only 1,000 are diagnosed in the country’s premier public pediatric cancer refererral centers. It is our vision to give every Filipino child the chance to fight cancer,” Secretary Duque said in his statement.

The treatment of childhood cancer remains to be the greatest medical success story of all time. However, while developed countries such as the United States, Germany and Denmark have 70-80 percent cancer survival, many countries in Asia, including the Philippines, only have less than 20 percent overall survival rate. The disparity does not only come from varied significant country investments in pediatric cancer but also in the complex interplay of building capacity and infrastructure, development of multidisciplinary teams and promotion of best practices.

The Health Secretary shared that, in 2009, the Childhood Acute Lymphocytic Leukemia Access Program (ALLMAP) was implemented through the Philippine Children’s Medical Center. It provides free chemotherapy drugs to pediatric patients in line with the Philippine Cancer Control Program’s Comprehensive Cancer Care and Optimized Cancer Survival in 2025. The program also extends to all other pediatric cancers in designated public hospitals across the country.

The real challenge, according to Secretary Duque, is the difficulty of many Filipinos to access health care given the archipelagic nature of the country, with more than 7,000 islands. To address this challenge, the Department of Health (DOH) has invested in infrastructure and human resource to create service delivery networks to provide the necessary health services. DOH has identified healthcare institutions across the country to be developed as pediatric cancer excellence centers designed to deliver holistic, child-centered, and multidisciplinary care.

The Secretary further stated that the Philippines drafted a National Childhood Cancer Plan based on the World Health Organization’s Health Systems Building Blocks. The plan provides a road map that addresses the specific needs of children and families.

As a long-term measure, there is a pending legislation for a National Integrated Cancer Control Act which will expand government efforts to strengthen integrative, multi-disciplinary, patient and family-centered cancer control policies, programs and systems at all levels of existing health care delivery system.

Secretary Duque was a panelist in the subject event entitled “Global Initiative for Childhood Cancer: Ensuring a right to cure” held on 28 September 2018 at the UN headquarters in New York. The side event was hosted by the Permanent Mission of and the Permanent Mission of Jordan in partnership with the World Health Organization, St. Jude Children’s Hospital, and the Permanent Missions of El Salvador, Moldova, Morocco, the Philippines and Russia. The objective of the event is to look into childhod cancer care and the global survival disparties and discuss ways on how to increase childhood cancer survival worldwide. END