GA adopts PH-sponsored resolution on promoting welfare of persons with disabilities, including in the context of the COVID-19 pandemic 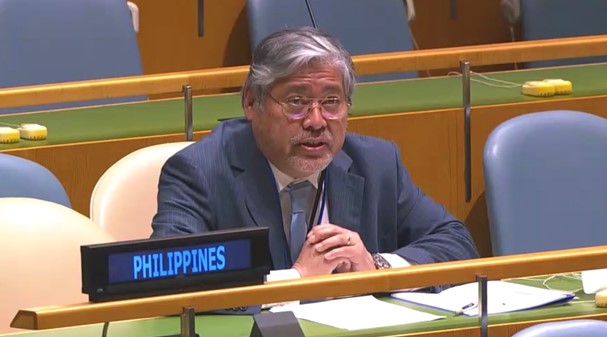 Philippine Permanent Representative to the United Nations Enrique A. Manalo introduces the resolution on Persons with Disabilities tabled by the Philippines at the Third Committee of the General Assembly.  The resolution was adopted by consensus.

New York, 13 November 2020 – The Third Committee of the UN General Assembly adopted by consensus the resolution “Inclusive development for and with persons with disabilities” initiated by the Philippines together with Tanzania.

The resolution also takes note of the initiatives that the UN has undertaken in order to promote disability-inclusion in COVID-19 response and recovery efforts.

The Philippines tables the resolution every two years as an expression of the Government’s high priority on the promotion of the welfare of all Filipinos, including the vulnerable and marginalized.  This initiative maintains the Philippines’ role as a strong advocate for the promotion of social development in the United Nations.

The resolution will be referred to the General Assembly, along with the other resolutions adopted by the Third Committee, for its final adoption in December.

The recording of the introduction of the resolution is accessible via https://youtu.be/BC3WLIFaLZc. END