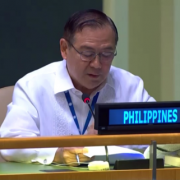 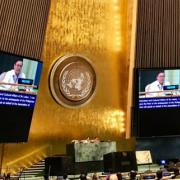 05 September 2018, New York City – The Bangsamoro peace process represents the desire of the Bangsamoro people and the larger Filipino community to take ownership of peacebuilding achieved through continuing dialogue, confidence-building and mutual trust.

“For Filipinos promoting a culture of peace is a natural,” Ambassador Locsin said. “We have been victims of atrocities in two wars…But we never committed mass atrocities no matter the provocation.”

The Permanent Representative also delivered a Statement on behalf of the Association of Southeast Asian Nations (ASEAN) that affirmed ASEAN’s Declaration on Culture of Prevention as a way of pursuing “a credible pathway to sustaining peace” through six (6) key thrusts in conformity with the purposes and principles of the ASEAN Charter.

The thrusts focus on promoting a culture of peace and intercultural understanding; respect for all; good governance at all levels; resilience and care for the environment; healthy lifestyle; and supporting the values of moderation.

“With over 630 million people, ASEAN embraces a culture of peace as a core value of a politically cohesive, economically integrated, socially responsible, people-oriented and people-centered community,” Ambassador Locsin said.

The HLF’s aim was to “highlight emerging trends that impact on the realization of a culture of peace and to enable Member States and other stakeholders to exchange ideas on further promoting a culture peace.”

Dr. Rigoberta Menchú Tum, 1992 Nobel Peace Prize Laureate (Guatemala) and UNESCO Goodwill Ambassador, delivered the Forum’s keynote address focusing on her experiences as a peace advocate and commending the work of civil society in advancing a culture of peace in post-conflict areas.

H.E. Mr. Miroslav Lajćák, President of the General Assembly, also addressed the participants stating that “We cannot achieve a culture of peace from a hall like this. We need to take action on the ground…and we need new approaches.”

Over 40 Member and Observer States delivered their respective interventions during the High-Level Forum. END