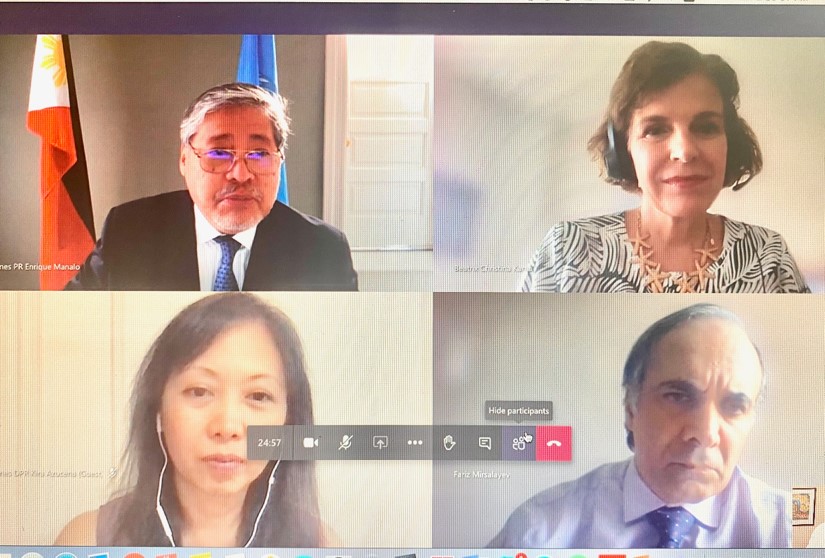 27 July 2020, New York City – Ambassador Enrique A. Manalo today officially commenced his duties as Permanent Representative of the Republic of the Philippines to the United Nations after presenting his credentials to the UN. Ambassador Manalo was received virtually by the Chief of Protocol of the United Nations, Ms. Beatrix Kania.

Before his posting in New York, Ambassador Manalo was Undersecretary for Policy of the Department of Foreign Affairs. It was the second time he has served in this position, having been Undersecretary for Policy from 2007 to 2010. He served as Acting Secretary of Foreign Affairs (Acting Foreign Minister) of the Philippines from March 9 to May 17, 2017.

He has represented the Philippines and has served as chairman of various international meetings and conferences. While Acting Foreign Secretary, he chaired the ASEAN Ministerial Meeting in April 2017. He also chaired various ASEAN Senior Officials Meetings, especially during the Philippine Chairmanship of ASEAN in 2017.

Undersecretary Manalo has also chaired meetings in a number of UN bodies, and has led the Philippine Delegation in a number of multilateral, regional and bilateral meetings.

In light of the ongoing situation presented by COVID-19, Letters of Credentials of new Permanent Representatives are submitted electronically. When the situation allows, Ambassador Manalo will have an in-person meeting with the Secretary-General for the ceremonial presentation of credentials.