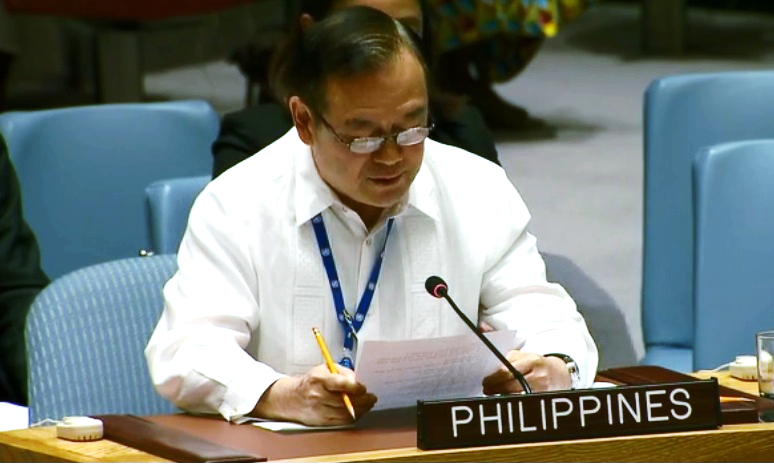 Permanent Representative of the Philippines to the United Nations Teodoro L. Locsin, Jr. delivers the Philippine statement during the Security Council Open Debate on Children and Armed Conflict.

9 July 2018, New York – Permanent Representative to the United Nations in New York Ambassador Teodoro L. Locsin Jr. affirmed the primary duty of the Armed Forces of the Philippines not only to keep the peace but also to keep children away from armed conflict and, for those caught in the midst of battle, to keep them safe.

In his statement delivered during the Security Council Open Debate on Children and Armed Conflict on the theme “Protecting children today prevents conflicts tomorrow” last July 9, Ambassador Locsin cited that under AFP’s regulation called “Children protection during armed conflict situations,” children are given special protection in armed conflict settings to spare them the immeasurable psychological cost of war that they will have to bear into adulthood which impacts on the nation’s future.

Referring to the painful experience of the siege of Marawi where children recruited by the militants were hurt, Ambassador Locsin said under the AFP’s regulation, children rescued and recovered, including those apprehended for alleged association with rebel armed groups, are handed over to the local social welfare officer for processing and pyscho-social services.  He also cited the ongoing collaboration between the Philippines’ Council for the Welfare of Children and UNICEF to end child rights violations.

Ambassador Locsin explained that these measures were in line with the Philippines’ strong commitment to the UN Convention on the Rights of the Child and its related Optional Protocols, laid out in the 3rd National Action Plan for Children and the Philippine Plan of Action for the Elimination of Violence Against Children.  He also cited Executive Order No. 138 that strengthens the Children in Armed Conflict program through the conduct of human rights trainings and monitoring, reporting and responding to child rights violations in situations of armed conflict. END.