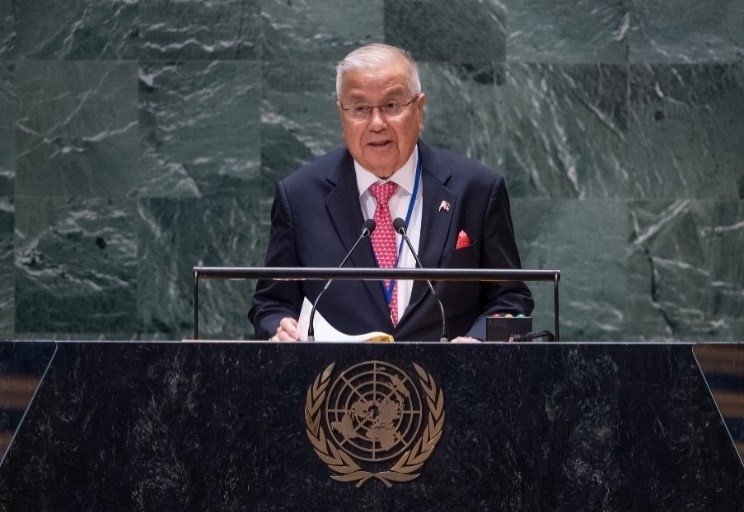 UNITED NATIONS, NEW YORK, 15 September 2022– Ambassador Antonio M. Lagdameo delivered the statement of the Asia-Pacific Group at the UN General Assembly Plenary to commemorate the passing of Her Majesty Queen Elizabeth II of the United Kingdom.

In his remarks, Ambassador Lagdameo stated that the Queen is the longest-serving monarch in British history and had lived through momentous historical events of domestic, regional and global importance.

He also stated that the Queen visited the Asia-Pacific region many times, reinforcing the region’s sense of community and relations. “The Queen leaves behind an indelible imprint, as her ideas inspired many ordinary people to work towards economic progress and the greater good,” PR Lagdameo said.

The Ambassador added that the Her Majesty lived an outstanding life of service, who showed to the world that it is possible to improve human relationships and elevate the human condition.

Recognizing her significant work and contributions as a philanthropist, the Ambassador concluded that the Queen’s passing inspired many people with her enduring legacy and a life dedicated to service.

Meanwhile, in his national capacity, Ambassador Lagdameo stated that Her Majesty is an enduring symbol of royal tradition, international cooperation, and trust in the rule of law.

“The Queen led her country with steely determination and unshakeable conviction, addressing complex challenges in an evolving global landscape, punctuated by climate crises, pandemic and regional conflicts, and more,” he said.

Ambassador Lagdameo also made reference to President Ferdinand Romualdez Marcos, Jr.’s message, stating that the Queen would be remembered for exemplifying "a true monarch's great dignity, commitment to duty, and devotion to all those in her realm."

He concluded by expressing that “the Filipino people are in solidarity with the family of King Charles III and the people of Great Britain at this difficult time.”-END.